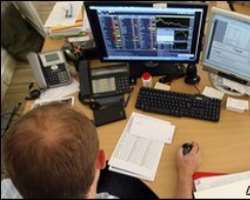 European stock markets closed sharply lower after a day of continued fears about eurozone debt problems and their potential impact on the global economic recovery.

Earlier, Asian markets also saw sharp falls. As well as eurozone worries, stocks in South Korea and Japan had been affected as North Korea reportedly went on to military alert.

In London, the FTSE 100 has now fallen by more than 10% in little more than a month after hitting a 22-month high in April – it stands at its lowest level since 7 September 2009.

That added to investors' worries over the weekend rescue of Spanish bank Cajasur by the Bank of Spain, only the second time the central bank has saved a regional lender.

Amid concerns over solvency in the sector, and in the wake of the Cajasur rescue, four Spanish savings banks then announced plans to merge.

Continue reading the main story
Will these [government budget] cuts reduce demand and so make cutting deficits even harder? There is a risk here.

Cajastur, Caja de Ahorros del Mediterraneo, Caja Extremadura and Caja Cantabria said they had reached agreement to form a group that would “strengthen solvency and assets of the participating banks”.

“There's never been any mystery about the excessive exposure of Spain's banks to a bloated property market,” said BBC business editor Robert Peston.

“The mystery has been how its banks avoided crippling losses on this exposure – although that increasingly looks like pain postponed rather than avoided.

“Or, at least, that's what today's retreat in share prices across Europe is saying, with bank shares falling especially sharply,” he added.

These concerns have lead investors to seek “safe havens” for their money. German government bonds – or Bunds – are currently seen as one such place – the ten-year bund yield sank to a record low of 2.55%.

The yield is the interest rate an investor receives on a bond. If it is low in comaprison to other governments' bonds, it indicates investors have high trust that it will be paid back and are prepared to accept the lower interest in return for that certainty.