EFCC to Ekweremadu: You do not need to lose sleep if you're corrupt 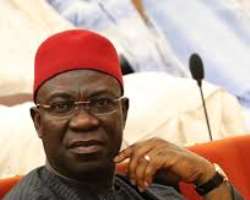 The Economic and Financial Crimes Commission (EFCC) on Wednesday told the Deputy President of the Senate, Ike Ekweremadu, that he had no cause to be alarmed, if he has no skeleton in his cupboard.

The lawmaker had alleged during Wednesday's plenary that the EFCC was plotting to raid and plant incriminating materials in his Enugu home to justify his arrest.

He said the plot was being sponsored by a cabal in the Presidency to ensure his detention and indictment with the aim of tarnishing his political career.

The senator read a two-page letter purportedly from a source close to the commission who he said tipped him off on the alleged plot.

He said, “The commission wishes to state in very strong terms that it is not aware of any plot to set up Ekweremadu for any arrest.

“If any agency is plotting to plant monies and guns in Ekweremadu's residence, it is certainly not the EFCC as such antics are alien to the commission.

“Nevertheless, the commission is worried by the alarm and the fact that the highly-regarded Deputy President of the Nigerian Senate would go public with such unverified information without first double-checking with the Commission.

“This is not only very strange but smacks of a scripted propaganda campaign to distract the Commission by putting it on the defensive.”

“It must be emphatically stated for the benefit of Sen Ekweremadu and others who share similar misconception and jaundiced views of the EFCC, that the commission does not need any grand plot to arrest and prosecute him if he is found to have violated any law that EFCC enforces.

“He does not belong in the category of public officers that enjoy immunity from arrest and prosecution by law enforcement agencies.”

Uwujaren emphasised that the allegation was a figment of the imagination of Ekweremadu's source”, which he described as questionable.

“The commission's candid advice to Ekweremadu is to sleep easy if he is not involved in the looting spree that seems to be the pastime of many Nigerians in the corridors of power.

“Let it be known, however, that there will be no amount of scare-mongering that will dissuade the EFCC from vigorously enforcing its mandate to rid Nigeria of corruption,” he said.