I did not maltreat Buhari during his ouster in 1985: Col Sambo Dasuki (retd) 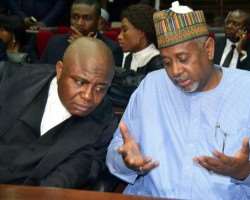 Embattled National Security Adviser, NSA, to former President Goodluck Jonathan, Col. Sambo Dasuki (retd) has dismissed insinuations that his detention has to do with a retaliation of similar maltreatment he meted out on President Muhammadu Buhari in 1985.

Dasuki in his account contained in the book, ''Against the Run of Play,', authored by chairman of Thisday newspaper Editorial Board, Mr. Segun Adeniyi, also stressed the enormous support he gave to President Buhari in the build-up to the 2011 general election. In the extracts of the encounter between the two, Dasuki said: “I always respect and dignify my seniors and those in positions of authority, whether in service or after. Though as a young officer, I was reluctant to be among those that arrested him. And I was not. “I only met him afterward at Bonny Camp with Lawal Rafindadi. There is no way I could have maltreated him as being alleged in some quarters.

I am glad most of the actors are still alive.”
On the December 1983 coup d'etat, Dasuki admitted that he and two young military officers (who are still alive) 'travelled to Jos to brief Major General Buhari, who was then the GOC of 3rd Armoured Division on the furtherance of the planning of the 1983 coup which made Buhari the major beneficiary of the ouster of the elected President Shehu Shagari.'

Adeniyi added: “He even told me how Buhari expressed his bitterness about insinuations on his stewardship in one of the public institutions. Dasuki assured the then GOC not to worry about such reckless and mischievous insinuations. ''I asked why he participated in the ouster of Buhari just less than two years afterward. He simply answered that General Buhari should know whom he should blame.”

In the book, the author stated that “One of those who worked tirelessly to make the 2011 alliance between Tinubu and Buhari work was Colonel Sambo Dasuki, who would later become the National Security Adviser to Jonathan.” The author noted that El-Rufai, the current governor of Kaduna State expressed the belief that following the collapse of the merger talks, both Tinubu and Ribadu worked for Jonathan.

He further said: “Tinubu of course gave the votes from Lagos and a few other SouthWest states, except Osun, to Jonathan, while the calculation of Ribadu was to reduce Buhari's votes in the north even though he failed on that score.” Meanwhile in an encounter with a blogger and the Publisher of the Economic Confidential, Mr. Yushau Shuaib, in 2015, Dasuki said he had supported Buhari's presidential aspiration in 2003, 2007 and 2011.

In a widely-syndicated piece by the blogger, titled: “Sambo Dasuki: An Encounter with the spymaster,” Dasuki said he knelt down in 2011 for the former National Chairman of the defunct Action Congress of Nigeria (ACN), Chief Bisi Akande, to make Buhari a joint candidate of the ACN and the defunct Congress of Peoples Congress (CPC). He said Nigerians could verify from respected Northerners, such as Adamu Adamu, Bashir Kurfi, Wada Maida, Sule Hamman and Kabir Yusuf, among others.

The journalist added: “The major shocker for me in his narratives was his campaign for Buhari to emerge the joint candidate of ACN and CPC in 2011. ''He disclosed how he (Dasuki) pleaded with Asiwaju Ahmed Tinubu in the presence of Bisi Akande to accept Muhammad Buhari as the joint presidential candidate for ACN and CPC. “Dasuki stated that he knelt down, begging 'Baba Bisi Akande' who was then the National Chairman of ACN that 'General Buhari is a man to be trusted.' “In their belief that Yoruba and South Westerners are never religious fanatics, especially regarding politics, Dasuki and his group suggested that Tinubu should be a running mate to Buhari. “When other elements opposed that proposition, Tinubu team, therefore, recommended a Buhari-Osinbajo ticket. Unfortunately, the ticket failed to stick as Pastor Tunde Bakare was eventually pushed forward by other forces.”

Prof. Yemi Osinbajo was later to be Buhari's running mate in 2015 and the nation's current Vice President. On the annulment of the June 12, 1993 presidential election, which was won by the late Chief M.K.O.

Abiola, Dasuki said he was one of those who confronted the late Head of State, Gen. Sani Abacha. The journalist said: “Dasuki told me the story of how he and some others confronted late Gen. Sani Abacha over June 12 election which was won by Chief Moshood Kashimawo Abiola (MKO). This led to their premature retirement. “The persecution that followed forced him into exile where he teamed up with opposition elements struggling for the return of democracy in Nigeria.”