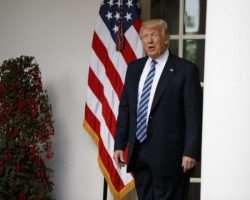 President Trump called for a government shutdown later this year to further the goals of the Republican Party.

On Tuesday morning, Trump said a shutdown is necessary for Republicans to negotiate with Democrats on a spending bill next September after the current spending bill runs its course.

He argued that the government closure would help to clean up the “mess” in Washington, D.C., either by prompting Senate Republicans to scrap the legislative filibuster's 60-vote threshold — something many GOP lawmakers oppose — or by boosting the Republicans in the 2018 congressional election

Trump's comments came in the aftermath of a congressional deal on a continuing resolution to keep the government funded through September.

And Democrats secured a number of wins at Trump's expense. The bipartisan, $1 trillion spending bill stipulates that none of the money can go toward constructing Trump's promised U.S.-Mexico border wall. The legislators also rejected most of Trump's proposed cuts to the nation's nonmilitary spending.

Amid criticism from some conservatives over the deal, Trump argued that Republicans gave the concessions to Democrats because they didn't have enough senatorial votes to go it alone. An alternative to scrapping the filibuster, Trump suggested, was for voters to elect more Republicans to the Senate in the 2018 midterms.

Trump has repeatedly expressed frustration at Congress for not quickly embracing his legislative agenda. In a recent interview, Trump denounced the rules of Congress as “unbelievably archaic and slow-moving,” and he called Democrats “totally obstructionist” at a rally in Pennsylvania on Saturday. Nevertheless, he said, Republicans would win the “great battles” ahead.

Republicans recently moved to scrap the filibuster and its 60-vote threshold for Supreme Court confirmations, after Democrats previously did the same for lower-court judges. However, a bipartisan supermajority of 61 senators said in March that they opposed eliminating the filibuster for legislation.

On a conference call with reporters, Office of Management and Budget Director Mick Mulvaney called Trump's push for a shutdown “defensible” but said he was focused on the current proposal.

“Right now, I'm not worried about September. I'm worried about this deal that's in front of us,” Mulvaney said. “But I think the president's tweet was that we might need a shutdown at some point to drive home that this place — that Washington needs to be fixed. I think that's a defensible position, one we'll deal with in September.”

As Mulvaney began his answer, a participant on the call put the exchange on hold, and music flooded in, providing the OMB director with a swelling but unwelcome score to accompany his remarks. After a classical piece, the music turned to patriotic pop like “Yankee Doodle Dandy” and finally “America the Beautiful.” From another line came what sounded like a baby crying.

Before Trump's provocative call for a government shutdown, the news cycle was on track for the second straight day to focus on his peculiar understanding of the underlying factors leading to the Civil War. Trump had questionably claimed that the country's seventh president, Andrew Jackson, who died in 1845, would have prevented the Civil War, which lasted from 1861 to 1865, from breaking out had he been around at the time. Trump's apparent fondness for autocrats was also bubbling up in the news cycle.