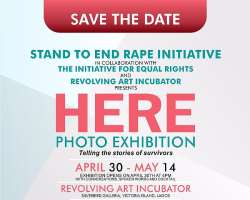 The Initiative for Equal Rights (TIERs) and the Stand To End Rape (STER) Initiative are set to launch the HERE campaign, a storytelling photography exhibition aimed at telling stories through pictures at 4pm on Sunday, April 30, 2017 at Silverbird Galleria, Victoria Island, Lagos.

According to Olumide Makanjuola, Executive Director of TIERs, the exhibition is aimed at telling stories of survivors of abuse both sexual and physical violence through pictures. The exhibition shows visual narrative of people who have been abused for no just reasons.

“Through the power of visuals, the HERE photo exhibition is aimed at urging people to kick against abuse in the society,” Makanjuola said.

The exhibition opens on Sunday, April 30 with a launch event. It will stay open to the public until Sunday, May 14, 2017.