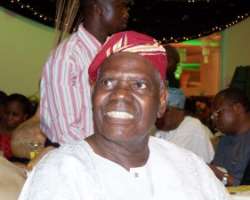 The founding national chairman of the All Progressive Party, (APC) Chief Bisi Akande has said that Nigeria might be heading to crisis if the issues around the health of President Muhammadu Buhari is not properly handled.

According to him, the most critical challenge facing Nigeria is the state of health of President  but cautioned that cautioned that those hoping to make political gains from it are mistaken.

Akande is the first senior member of the ruling APC to speak openly about the realities around the health of President Buhari, who has made very rare public appearnaces since his return from medical vacation in London since March 10.

The president’s absence from three consecutive Federal Executive Council Meeting and his failure to attend Monday May Day celebration in Abuja have combined to heighten apprehension among the citizenry over the festering health challenges of the president.

Akande while giving his candid opinion about the state of health of President Buhari noted that aside the health of the president,  the other critical issue is the disorder and lack of cohesion between the National Assembly and the Presidency.

He said “there are two challenges facing the country today. The first and most critical is the health of the President which, unfortunately, is a development beyond his control and for which we did not prepare.

“The second is the disorder and lack of cohesion between the National Assembly and the Presidency. These are two great red flag dangers that have the potential of plunging the country into unprecedented chaos and of destabilising the gains of democracy since 1999,”

“The greatest danger however is for political interests at the corridor of power attempting to feast on the health of Mr President in a  dangerous manner that may aggravate the problems between the Executive and the National Assembly without realizing if, in the end, it could drag the entire country into avoidable doom.

“As delicately fragile the Union of Nations making up Nigeria, so delicately fragile the democracy and the rule of laws governing the polity of the Union called Nigerian Federation. Certain Nigerian leaders, having been blindfolded by corruption, assume the possibility of using money in manipulating the national security agencies to intimidate, suppress and hold down certain ethnic nationalities or playing one ethnic nationality against the other with a view to undermining the constitution and perversely upturning the rule of law.

“To avoid the ugly consequences of letting President Buhari's ailments throw Nigeria into confusion, I am urging all Nigerians to begin to pray for his divine healing and perfect recovery”.

Akande however cautioned that “those who wish to harvest political gains out of the health of the President are mistaken. This is not Nigeria of 1993. We are in a new national and global era of constitutionalism and order. We hope Nigerians have enough patience to learn from history

“My greatest  fear, however, is that the country should not be allowed to slide into anarchy and disorder of a “monumental proportion”.

He then urged Nigerians “to pray fervently for President Muhammadu Buhari's health” saying “the health of the leader is intricately intertwine with the health of the Nation. It is more so in a delicately fragile Union of Nations called Nigeria”.

Akande said he became worried when he didn't see President Buhari at the wedding of one of his sons in Kaduna.