Isiaka Adeleke, the Death, the Shock and Aftermath 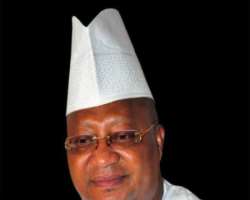 The people of Osun State suddenly woke up on the morning of Sunday, April 23, to grapple with the reality of the rude shock of Isiaka Adeleke's death!

Which Adeleke? Is it the same Adeleke we know? The first executive governor of the State?, they asked rhetorically.

But unfortunately, Isiaka Adeleke was really dead. The news is real; the Senator is gone!

Series of events followed
People trooped out to Biket Hospital in Osogbo where the late Senator was confirmed dead. It was simply unbelievable, they wanted to see for themselves. The crowd was so massive you would think they were there for some bonanza of some sort. The body of the deceased had to be sneaked out via the hospital's back door!

The late legislator representing Osun West Senatorial district who was the first civilian governor in Osun State died at the age of 62 after he experienced health complications in his residence in Ede town from where he was taken to the hospital.

Adeleke was elected as the first civilian governor of Osun State in 1992 on the platform of the Social Democratic Party after the creation of Osun State which was carved out from the old Oyo State.

The Senator was already prepared to contest as a governorship aspirant on the platform of the All Progressive Congress (APC) in the next year governorship election in the state. His death came as a shock and a bitter pill for the entire people of the state, especially those who saw him at political meetings and social functions on Friday and Saturday respectively.

The late Adeleke was born on January 15th, 1955 to the family of Senator Ayoola Adeleke and Esther Adeleke in the city of Enugu where he spent his early years until the break out of the Nigeria Civil War. He started his primary education at the Christ Church School, Enugu before moving to Ibadan. The young Adeleke completed his secondary education at Ogbomoso Grammar School in Oyo State.

Demand for autopsy
As a grassroot politician and man of the people, when the corpse of Adeleke arrived his residence in Ede, his supporters and lovers sobbed profusely and wailed over his death.

And as some Muslim clerics were sighted in Adeleke's living room, preparing for his funeral rites, the family members ordered that an autopsy be carried out to determine the real cause of his death.

This became necessary to calm the frayed nerves of those who suspected murder and dispel series of rumours that surrounded the Senator's death.

The corpse was subsequently taken to the Ladoke Akintola University Teaching Hospital, Osogbo for the post-mortem.

Protests and near mayhem
After this, hysteria became the lot of his supporters as they staged protests, lamenting his sudden death. While some of the youths alleged spiritual attack, others alleged poisoning. They claimed their beneficiary was killed to pave way for another aspirant to win the next year governorship election.

In the midst of these came another rumour that the late senator actually died of over-dose of pain killer.

Traditional rulers were not left out - the Ooni of Ife, Oba Adeyeye Ogunwusi, Oluwo of Iwo land, Oba AbdulRasheed Akanbi among others also expressed sadness over the unfortunate death.

Political parties, State House of Assembly members, social-political groups and other prominent personalities in the country, all expressed shock and condolences over the death of the man whom they believed would be very difficult replace in the nation’s political landscape.

Family debunks claims
Debunking these claims on behalf of the family, the Immediate younger brother of late Senator, Dr Deji Adeleke said the real cause of his death was yet to be determined and Implored people to stop speculations that could cause tension in the state.

"Our brother was a Muslim as you all know, but we have to delay his burial till the following day so as to conduct postmortem test and the doctors said it would take one to two weeks before the result comes out, contrary to what is being speculated on the social media and some conventional newspapers".

"However, his death is a painful one and the family is still in doubt because our brother was not sick before his sudden death".

"We have cried and cried but we cannot query God. However, we want to mourn our late brother in peace and not with violence. Adeleke was a hero in the house and in his community. The pains of his death will take a very long time before it can be healed in our hearts."

After all said and done, the fact that boldly stares at us in the face is that Isiaka Adeleke is dead. He is no more and has gone to the great beyond. He is no longer with the living. His death, even with the passage of days, remains a nightmare which the people of Osun would have wished they never experienced.