You are a cheap Opportunist, Osun APC replies Lasun Yusuff 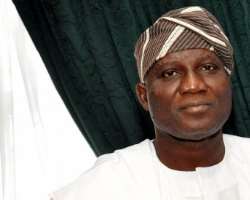 The leadership of the All Progressives’ Congress (APC) in Osun State has tagged the Deputy Speaker of the House of Representatives, Hon. Rt Lasun Yusuff as a cheap opportunist in reply for his allegations against the party.

It would be recalled that Lasun Yusuff issued a press release on Saturday alleging Osun State Governor, Mr Rauf Aregbesola and some APC members of threatening his life since his intention to run for Osun Governorship in 2018.

In a Press Release signed by Barrister Kunle Oyatomi, the Director of Publicity, Research and Strategy of the All Progressives Congress (APC), the party described Lasun Yusuff's allegations as unfounded and baseless security concerns.

APC also denied the claim by Hon. Lasun Yusuf that himself and the late Adeleke were singled out and warned not to contest in 2018 governorship election.

According to the release, "The attention of the leadership of the All Progressives’ Congress (APC) in the State of Osun have been drawn to a release issued by one Dr. Aderemi Suleiman Ajala on behalf of the Deputy Speaker, House of Representatives, Hon. Lasun Yussuf on the threat to his life, among all other allegations of unfounded and baseless security concerns.

"We hereby state unequivocally that the Deputy Speaker and his band of delusional propagandists are mere opportunists clustering to the death of our late party leader and illustrious son of Ede, Senator Isiaka Adeleke to make smokescreen names and score undue political relevance for themselves.

"To all intent and purposes, the deputy speaker has once again demonstrated to the teeming populace that he is a mischievous and a mere opportunist who lacks the deserving respect for the dead and cannot stand by the etiquette and traditional norms of our rich cultural heritage as Yoruba speaking people.

"Setting the records straight, the executive of the Osun State APC in line with the tenets of democratic principles entrenched in the ideology of our great party, and in order not to distract the business of developmental governance and fulfilment of our electioneering promises as contained in our manifesto issued an advisory notice to all intending governorship aspirants for the 2018 elections to wait until there are clear guidelines and directives by INEC, as such the claim by Hon. Lasun Yusuf that himself and the late Adeleke were singled out and warned is a blatant lie and a template to deceit.

"Alas, without searching further, Hon. Yusuf has without any iota of doubt within us that he is the chief sponsor and promoter of the irritating blackmail against the government of the state of Osun that the late senator of osun west senatorial district was poisoned which was a resultant effect of his death. This in its entirety is illogical and irresponsible.

"Its quite unfortunate that someone who rode on the popularity and acceptability of our party to get to National Assembly could fabricate tissues of lies against the Government and Leadership of the Party. We only wish to advise the lawmaker to simply retrace his steps if truly he is still a member of the Osun APC."