How I was probed by EFCC: Obasanjo 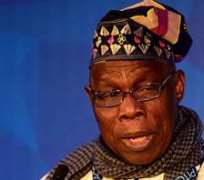 Amidst an outpouring of commendations from some of his political associates former President Olusegun Obasanjo last night disclosed how the Economic and Financial Crimes Commission, EFCC probed him and unearthed a foreign account long used by his late wife, Stella Obasanjo.

Obasanjo said the account which was opened by the late Stella in her maiden name before they got married was the nearest to what the former EFCC chairman, Mallam Nuhu Ribadu could find against him just after he had been appointed by him.

Ribadu who praised Obasanjo's steadfastness as president said that contrary to claims by Gov. Ayo Fayose of Ekiti State that Obasanjo begged him to go softly on Fayose in the period when the commission laid seige on him.

Ribadu also swore that Obasanjo was not privy to the arrest of Globalcom chairman, Chief Mike Adenuga.

Obasanjo at the occasion also disclosed how he gave former Police boss Tafa Balogun a 30 minute ultimatum to resign or be dismissed. Associates of the former President had converged in Lagos to celebrate him on the occasion of his 80th birthday.

The associates who converged as “Learners of the Olusegun Obasanjo School of Nigerian Politics” included former office holders in the Obasanjo administration and some of the country's leading names in the economy and Nollywood. As the get together commenced at 8.00 p.m. a jovial President Obasanjo charged his political disciples to make it a hearty evening and make it “a reunion, of reminiscences that will make us laugh, laugh and laugh.”

“I travelled with Baba several times and I can tell you that he was well respected and courted everywhere.” Otunba Daniel, Dr. Okupe also praised him but affirmed that he was a man who was strict and could punish severely if anyone fell out of line. Dr. Okupe said President Obasanjo could often be misunderstood but that he always had the best intentions. Mallam Uba Sani commended him as the most detribalised Nigerian leader ever saying that Obasanjo's successors surrounded themselves with friends and family noting that that is “why we are here today.”

Mallam Ribadu in his comments said that his success in life can be traced to the support he had from President Obasanjo. Ribadu moved Obasanjo when he reminded him that the promise of a wrist watch the former president made to him while he was in office was yet to be fulfilled prompting Obasanjo to give him the wrist watch he was wearing. Following the words of commendation Obasanjo flanked by his wife, Bola and associates cut a birthday cake.