I had no personal political disagreement with Amaechi: Jonathan 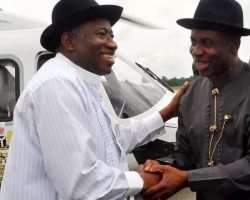 Former President Goodluck Jonathan has said he had no political disagreement with the minister of transportation, Rotimi Amaechi. Jonathan rather claimed that Amaechi had a running battle with his wife, which he said he tried to resolve the issue but to no avail. This was contained in a book titled, 'Against the Run of Play,' written by the Chairman, Editorial Board of ThisDay, Olusegun Adeniyi.

Reacting to Jonathan’s claims, Amaechi admitted that he was at loggerheads with the former president’s wife, but added that he Jonathan was not saying the whole truth. He said there were also disagreements between him and Jonathan, during the latter's era as the President.

The former governor of Rivers state attributed the cause of his disagreement with Jonathan to illegal and excess deduction from the federation account by the former president. His words: “I could not surrender my mandate to a woman (Patience) in Abuja, even if such a person was the wife of the president…that basically was my sin with Dame Patience Jonathan.

“If in one year, you took about N300bn from the federation account to pay for subsidy and the next year, you are taking almost N2tn for the same thing when fundamentals had not changed, then serious questions should be asked. “And as NGF (Nigerian Governors Forum) chairman, it was my responsibility to ask those questions and Jonathan took them personal.”

Meanwhile, Amaechi recently claimed that Jonathan admitted he failed the people of Niger Delta after six years in power. The minister stated that he believes dialogue with President Muhammadu Buhari's administration will be the best way to address the unfairness dished out to the region over the years. Speaking in an interview on Channels TV, Amaechi wondered why ex-president Jonathan did nothing for Niger Delta in his two years as vice president and six years as president. NAIJ.com