Jonathan was too small for the Presidency: Obasanjo 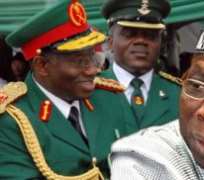 Former President Olusegun Obasanjo has said that former President Goodluck Jonathan from his first days as President showed he was too small for the office, saying he, Obasanjo, acted more as an opponent of Jonathan than a supporter of Muhammadu Buhari ahead of the 2015 presidential poll. Ex President Jonathan and Gen. Obasanjo (Rtd) Obasanjo, who said Jonathan deceived him that he would not give Mrs. Diezani Allison-Madueke the petroleum portfolio in his cabinet was deceived into believing that he could use money to buy the 2015 presidential election.

Obasanjo in the book, Against the Run of Play: How an Incumbent President was defeated in Nigeria, written by former presidential spokesman, Segun Adeniyi, also revealed that Jonathan was gripped by the fear that Buhari, as president, would jail him or lead him to an early grave. In the 204-page book, former President Jonathan is himself quoted as saying he could not be held accountable for provocative remarks made by some of his supporters, even as former Senate President, David Mark, is also quoted in the book as alleging that he forewarned the former president about the alleged conspiracy against him in the north but to no avail.

A good example is my state here in Ogun. “Despite the best of intentions, nobody from Ogun West has been able to become governor because of this minority issue and it will take a conscious effort to make it happen. So, it was in the context of that I had to plead with prominent people in the North to allow Jonathan run for a term.”

I warned him not to make Diezani petroleum minister But in a tone laden with regrets, Obasanjo pointed out that there were certain things Jonathan did that fell below his expectations as a former president. “There were certain decisions taken by Jonathan very early in his administration that pointed to the fact that the office was bigger than him and one of them was the appointment of a petroleum minister,” he said. According to Obasanjo, he cautioned Jonathan not to appoint Diezani Alison-Madueke to such a sensitive sector but the president ignored his counsel.

“Jonathan gave me the impression that he was not going to give her the portfolio but at the end he did and we can see the consequence. He, of course, knew what he was doing,” Obasanjo stated. Why I opposed Jonathan The former president also hinted at what riled him against Jonathan and why he parted ways with him in the run up to the 2015 election, a development which has given the impression that he was actively working in support of Buhari's candidature. But Obasanjo denied any direct support to Buhari.

He said: “I didn't join them in supporting Buhari; I joined in opposing Jonathan so Buhari was just a beneficiary of my opposition to Jonathan since my position was AOBJ: meaning Any Option But Jonathan.”, Obasanjo explained that Jonathan and his handlers believed that they could buy the last election and that they were so arrogant about it that the PDP would print only one nomination form for him and him alone.

“I believe the President's concern or fear is not about life after office per se, because he and I have had occasions to talk about this both seriously and jovially. I believe the President's fear is particularly motivated by the person he sees as his likely successor, that is General Buhari. I believe the people would have been telling him that Buhari is a hard man; he would fight corruption and he (Jonathan) may end up in jail if not in the grave,”

Obasanjo narrated in the book. The book also placed the defeat of Jonathan at the 2015 poll on the utterances of those close to the former president, chief among them being his wife, Patience. The book recalls the allegation by former Niger State Governor, Babangida Aliyu, accusing the former first lady of insulting the North with incendiary language, thereby alienating them from Jonathan during the election. It quoted Mrs. Jonathan as making a denigrating remark against Almajiri in the north, by saying “Our people no dey born children wey dem no dey count. Our men no dey born throw way for street; we no dey like people from the other side”, an apparent reference to the concept of Almajiri common in the north.

Reminded in the book that some persons close to him, especially Chief Edwin Clark and Asari Dokubo, were rather vocal and provocative in their utterances, Jonathan wondered why he should be held accountable for their personal opinions. The former president retorted: “Okay, let us agree for the sake of argument that Chief Clark and the others were offensive, what about those from other ethnic groups who were also making incendiary statement about my person with insinuations about people who wear bowler hats? “I am not defending whoever may have crossed the line among Ijaw people but let us be fair, why should I be held accountable for that and you would not hold other leaders accountable for what politicians from their own ethnic groups also said? he queried.

On why Jonathan lost the election, former Senate President, David Mark, said that he saw the defeat coming and had pointed out the unrealistic voting projections made by the party about the North to the former president and the conspiracy against him but he was not taken seriously. He said Jonathan should have seen the handwriting on the wall and done something about what was pointed out to him but no action was taken.

Mark lamented, “I saw it and at difference times, I pointed out to him and the party that the projections being made by some people around the president about what the voting pattern in the north would were wrong. “I could see the conspiracy and the gang-up building up in the north against the aspiration of Jonathan but my voice was drowned out by those who took it for granted that a sitting president, and one from PDP, could not lose,” Mark said.

The former Senate President also mentioned that the former Vice President, Namadi Sambo, was also aware that Jonathan was not strong in the North but apparently had little to say in the campaign to re-elect Jonathan. “Some people were deceiving the president with the kind of false scenarios they were painting for him. The VP could see the conspiracy but I don't know how much influence he had on the campaign. Why Jonathan couldn't see it until it was too late is what I find difficult to understand,” Mark pointed out.