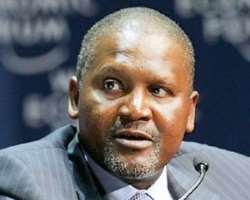 Nigerian businessman Aliko Dangote has denied planning a move to buy a 15.9 per cent stake in Premier League side Arsenal.

Reports claimed he was interested in Lady Nina Bracewell-Smith's shares, which are available for about £100m.

In a statement on Monday, Dangote confirmed he had 'been involved in conversations around investment in the past'.

But he added, 'I can say categorically at this time that I have no intention of investing in the club and will not be acquiring a stake.'

Dangote is reputed to be Africa's richest man, with Forbes magazine in the United States estimating his fortune two years ago at $3.3bn (£2.3bn).

His wealth was built on a business empire that he founded in 1977 and now includes the number one sugar production company in Nigeria, a cement factory and textile products, plus he was made a Commander of the Order of the Niger five years ago.

He was quoted recently as saying that he had been an Arsenal supporter for a 'long time' and stated: 'It started in 1980 when I forged a relationship with Mr David Dein, former vice-chairman of the board of Arsenal.'

Last month, Lady Bracewell-Smith instructed UK brokers Blackstone to find a buyer, having previously given up her place on the club's board in 2008.

Stan Kroenke and Alisher Usmanov are Arsenal's two largest shareholders and it was thought that her decision to sell might lead to a bidding war between them.

US billionaire Kroenke owns 29.98 per cent of the club's shares, while Russian tycoon Usmanov holds 26.29 per cent, but if any shareholder's stake reaches 30%, he or she is obliged to make a takeover offer for the club.

Neither Kroenke – who also owns the NBA's Denver Nuggets basketball franchise, Major League Soccer's Colorado Rapids football club and a stake in the NFL's St Louis Rams American football team – nor Usmanov has so far been willing to take that step.