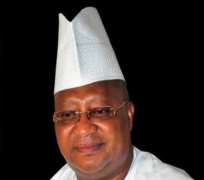 BEVERLY HILLS, April 24, (THEWILL) – The autopsy done on the remains of Isiaka Adeleke, the Osun West Senator who died on Sunday in Osogbo, suggests that the late lawmaker had an overdose of painkillers in his system.

Adeleke died early Sunday at Biket Hospital in Osogbo but his younger brother, Deji, ordered an autopsy to be done at the Ladoke Akintola University Teaching Hospital (LAUTH) to ascertain the cause of death.

This was due to the tension Adeleke's death generated as a number of his supporters protested his death speculating that he was poisoned by some politicians interested in the governorship position of the state of Osun.

According to reports, a medical examination of the tissues taken from the Senator's body indicated he was injected with an overdose of painkillers.

THEWILL learnt that the late senator suffered from nagging pains in one of his legs, probably due to arthritis, and was injected by one of his personal physicians who is said to have administered similar drugs on him in the past to suppress the pain.

However, sources claim that the doctor in question is not a qualified medical personnel and had since been arrested.

The preliminary result of the autopsy has since been made available to the family. It has however not been made public.

The late senator was buried at his residence in Ede on Monday .