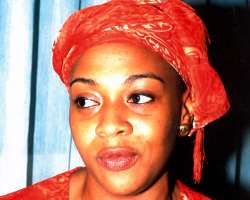 By Emmanuel Addeh, Ilorin
Tuesday, 25 May 2010
The purported endorsement of a female candidate by kingmakers in Kwara State continued to generate controversy on Monday as various Islamic groups declared their disapproval of the action.

Their position, it was gathered, might not be unconnected with claims that Senator Gbemi Saraki, sister to the current governor of the state, had been given the go-ahead to contest the 2011 governorship election.

In a communiquÃ© issued by the body of Muslim scholars in Ilorin on the position of Islamic law on female leadership, the scholars explained that it was against the Islamic religion to allow a woman headship in a society where men exist.

Speaking after a meeting to deliberate on what it described as issues of good governance, the spokesperson of the clerics, Mallam Yushau Muhammad, said that the recent rumours about the possible emergence of a female governor in the state should be seen as deceitful and totally unacceptable.

Part of the communiquÃ© reads,'We as descendants and disciples of Sheikh Aalim, Sheikh Kamaldeen Al-Adabiyy, Sheikh Adam Al-llory and many other scholars, see it as our collective obligation before our creator, to set the records straight on the position of Islam in this case. This is being done without any motive to either support or work against the candidacy of any aspirant.'

'Leadership in Islam is a responsibility and not a privilege; hence, restriction of grand leadership to males alone never suggests discrimination against women. 'The fact that most of the so-called democratic countries of the world still have males as their leaders speaks volume of the indisputability of differences in natures, propensities and peculiarities of each gender.'

Also, the Supreme Council for Sharia in Nigeria, Kwara state Branch has called on political stakeholders in the state to resist the temptation of making a woman a governor or a deputy.

In a statement issued by the council secretariat , a copy of which was obtained by our correspondent, the group maintained that no reasonable ,sensible and God fearing tribe ,group of people or nation will make a woman a leader 'especially where there are able and competent men.'

The group added, 'our model and value in Kwara state is built on Islamic tenets, our religious tenet cannot be set aside in electing a political leader in a state like ours and the political sycophants should not be allowed to destroy our precious values for worldly gain.

''The city where a woman(Biliqis ) was said to have reigned in history was later surrendered to a man and the city went into extinction '' the statement added.

The Gbemi Vanguard, a group of supporters has also insisted that it is the constitutional right of the senator to contest, adding that the laws of the land do not discriminate against women on the grounds of gender.

It was however gathered that the Muslim community in the state is divided on the issue, as some of them had openly spoken in favour of a female candidate, arguing that the opposition to a female governor was a misinterpretation of the Quran.