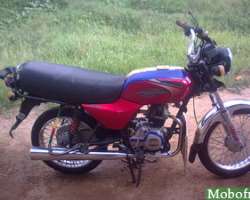 A Magistrate court in Osogbo, Osun State presided over by Magistrate Habibat Basiru has ordered that a 24-year old motorcyclist, Asaolu Taiwo be remanded in Police custody over alleged theft.

Police prosecutor, Olayiwola Rasaq told the court that the accused person on the 14th of July, 2016 at Obalende area, Osogbo stole one Bajaj Boxer motorcycle, property of one Wahaab Rauf.

He added that the offence contravened section 390(9) of Criminal Code Cap 34, volume II, Laws of Osun State of Nigeria, 2003.

The accused person who had no legal counsel to represent him in court, pleaded guilty but explained that he didn't really stole the motorcycle.

"It was Rauf that gave me the motorcycle and in that month last year, the motorcycle was stolen from me but out of fear, I ran away. It was yesterday Rauf saw me and handed me over to the police.

"The court should please have mercy on me, I didn't steal the motorcycle" Taiwo added sadly.

In her judgment, Magistrate Basiru ordered that the accused person be remanded in Police custody to get the fact of the case and adjourned the case till April 26,2017.