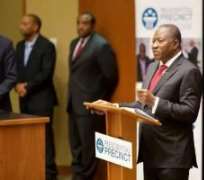 Suspended NIA boss, Ayodele Oke, has disclosed that Jonathan ordered the release of $289m in February 2015.

Buhari consequently ordered for their investigation by a three-man panel headed by Vice President Yemi Osinbajo.

The Punch reports that a top government source, on Thursday, April 20, disclosed that Oke admitted to the Osinbajo-led committee that his agency received the sum of $289m on the orders of the former president.

The source who spoke on condition of anonymity added that the Osinbajo-led committee had directed Oke to submit documents to back his claim.

NAIJ.com learnt that learnt that the suspended NIA boss had also gathered documents which would be formally submitted to the panel showing that the transaction was approved by Jonathan through the former National Security Adviser, Col. Sambo Dasuki (retd.).

However, operatives of the EFCC are said to be working on the theory that the money was meant for the prosecution of the 2015 general elections.

“The DG of the NIA has met with Vice-President Osinbajo and will submit documents pertaining to the transaction.

“The DG admitted on record that the transaction was authorised by former President Jonathan and Col. Sambo Dasuki, and as such, was simply following orders from the commander-in-chief. He will submit memos and other documents as evidence,” a source, who spoke on condition of anonymity because of the sensitivity of the case, disclosed.

Exposing how the alleged the transaction took place, the source said a memo was raised by the national petroleum investment management service on February 25, 2015, two weeks after the postponement of the presidential election for 'security' reasons, based on Dasuki's advice.

The money was received by the NIA and kept in a safe house.

“Specifically in January 2016, a letter was written by the DG NIA to the NSA, Babagana Moguno, on the existence of the cash. The memo exists and will also be submitted to the panel.”

The source said one of the puzzles the NIA would solve was why the apartment, where the money was kept was registered in the name of the wife of the DG, Mrs. Folasade Oke.

Meanwhile, the Senator Ahmed Makarfi-led faction of the Peoples Democratic Party (PDP) has called for the arrest of the suspended secretary to the government of the federation (SGF), Babachir David Lawal and the director general of the national intelligence agency (NIA), Ayo Oke.

But the PDP in a statement on Thursday, April 20, said the two officials should have been arrested and detained the same way PDP chieftains were being handled by the EFCC, Daily Trust reports.

The party said it amounted to double standard for the federal government to set up a committee to investigate the SGF instead of arresting and detaining him as the government has been doing to PDP members and other Nigerians.