Mystic who foretold Trump win, attack on Syria predicts World War 3 will begin in May 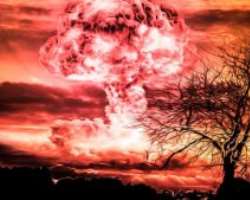 Villegas,  who claims to have accurately foretold Donald Trump’s presidency ,  has scary prediction for the world, a nuclear-driven war with global dimensions is in the offing.

Horacio Villegas, a self-proclaimed “supernatural being” called Trump the “illuminati king” who will “bring the world into WWW3,” according to the Daily Star. The day is May 13, the clairvoyant said.

Villegas, a Catholic, predicted 15 months ago that Trump would become president and he said no one believed him until it happened and now, no one is heeding his warning of the impending doom he saw in a dream.

“Last September I even sent out copies of my books to Catholic bishops and cardinals in an attempt to warn them so that they could warn the people, and they ignored me too!” Villegas told the Daily St

Chillingly, one of his prophecies appears to have already come true.

Villegas warned the US leader would attack Syria , which took place earlier this month when Trump launched a huge air strike on an airbase in Homs.

He also predicted that it would bring Russia, North Korea and China into the deadly global conflict – something which, if the prophecy is to be believed, may be just WEEKS away.

It is claimed that Our Lady – another name for the Virgin Mary, mother of Jesus – visited Fatima in Portugal on six different occasions. The mystic believes WW3 will break out on the 100th anniversary of the first visit of Our Lady of Fatima (Photo: AFP)

This was the day, according to the Catholic faith, that Our Lady warned people that if her requests to convert Russia to the faith were not followed, God would use the country to wreak havoc on the world.

Villegas is convinced war will break out on the 100th anniversary of the visitation – in less than four weeks’ time.

The last visitation is said to have occurred later that year, on October 13, 1917, where sje s believed to have announced: “The war is going to end, and the soldiers will soon return to their homes.”

The mystic believes World War 3 will end on the 100th anniversary of that date.

Villegas told the Daily Star : “The main message that people need to know in order be prepared is that between May 13th and October 13 2017, this war will occur and be over with much devastation, shock and death.”

However, he warned that so-called false flag events will take place between April 13 and May 13 where attacks are carried out under incorrect information, including in Syria and North Korea.