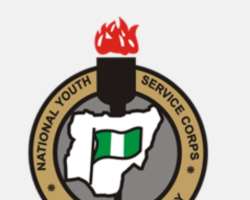 The National Youth Service Corps (NYSC) yesterday donated wheelchairs to some physically challenged individuals in Ede community, where its camp is located in Osun State in order to further strengthen their relationship.

The Osun State Coordinator of NYSC, Mr Emmanuel Attah who led other officials to the palace of the Timi of Ede, Oba Muniru Lawal, disclosed that Ede has been known as a peaceful town since NYSC camp was situated in the town.

Attah who said the Director-General of the Scheme, Mr. Suleiman Kazaure directed that three wheelchairs be presented to three physically challenged people who are indigent in the state, added that the choice of Ede was to further strengthen the love that has existed between the two since decades ago.

According to Attah, "the DG is not only passionate about the welfare of corps members and its staff but also about the community in which we find ourselves."

Attah noted that the choice of Ede was not by accident, but because it hosts the NYSC Permanent Orientation Camp, saying the town remains the first point of call for any corps members coming to Osun State.

"And in honour and respect to our father, the Timi of Ede, Oba Muniru Lawal, Laminisa l, we cannot but to start with the host community with these three chairs to be given to the physically challenged. More of these chairs are still been expected to be distributed to other people." Attach added.

He also disclosed that the wheelchairs are being distributed all over the country, saying "I urge philanthropists in our society to do whatever they could do for the indigenes, as a means of showing gratitude and paying our own tithe to God.

"We are here with three wheel chairs to be distributed. It is going on in all the states of the federation. We look in to the support of the town for the protection of lives of the corps member."

The beneficiaries of the wheelchairs
are: Shittu Toibat, Azeez Rafiu and Jimoh Lukman, the trio are indigenes of Ede town.

Speaking, Oba Lawal expressed gratitude to the NYSC for choosing Ede as the first place to begin the gesture, assuring that the town would continue to support the scheme.

"We received the gesture with joy and happiness. When the news got to me that NYSC was coming to donate wheel chairs to the less privilege, I was so happy. That's why we tried to gathered the three people out of many that we have in our community, at least to benefit from the gesture of NYSC. We are very grateful and the community is very happy.

"With the wheel chair now, they can be able to move from one point to another, even instead of begging around, they can be using this one as movement that will assist them on earning their day-to-day living and they will be comfortable.

"So, we want to enjoin those people that are well to do within our community to please emulate this gesture and give assistance to the less privilege so that our community will be better.

"We extend our appreciation to the NYSC community for deeming it fit to start the programme in Ede. We are assuring you of our continuous support."

Speaking on behalf of the beneficiaries, Lukman, appreciated the gestures for the less privilege, praying that NYSC would not lose any of its corps in the town.

Attah also used the occasion to inform the people that another orientation camp will begin on May 15, 2017 and urged the intending corp members to get prepared and do all necessary things required for the orientati