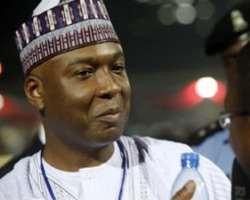 SENATE, yesterday, asked the Economic and Financial Crimes Commission, EFCC, to immediately unveil owners of the $43 million found in a luxury apartment at Ikoyi, Lagos. Senator Saraki President of the Senate, Bukola Saraki, who stated this in an interview with Arise Television late Monday night, also said the ongoing controversy and row surrounding the cash haul were giving Nigeria a bad image.

Saraki's entreaties came as media aide to the former governor of Anambra State, Mr. Peter Obi, confirmed, yesterday, the searching of Flat 1 occupied by the former governor in the building by the EFCC. Saraki, who noted that there was no reason for the controversy to have come up in the first place, said: “I don't think I should speculate or join the conversation on who the money belongs to.

I know it is the responsibility of the EFCC to reveal who the money belongs to. This is very simple. The agency that recovered the money should reveal who owns the money to put an end to this. “It is not good for the image of this country. We have heard different views, whether it is an individual, company, state government or an agency. I think this this circus must end.”

Meanwhile, Valentine Obienyem, media aide to the former Governor of Anambra State, Mr. Peter Obi, has confirmed the searching of Flat 1 occupied by the former governor in the Osborne, Ikoyi, building by the EFCC. Obienyem, who revealed that the ex-governor was resident in Onitsha, said the rented apartment by his wife was usually where Mr. Obi lived anytime he was in Lagos. He cautioned against mischief makers seeking fault in Obi, adding that all tenants in the building were also searched. “Obi even left instructions that we should allow them to also search his Onitsha residence should there be need for that. After the thorough search, nothing was found in the apartment,” Obienyem said.