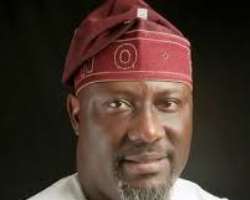 SAN FRANCISCO, April 17, (THEWILL) – The administrator of Ijimu local government area of Kogi state, Toufiq Isah, has requested the Economic and Financial Crimes Commission, EFCC, and the Presidency to investigate Dino Melaye for moving items meant for Internally Displaced Persons, IDPs, in the North-East last December to his country home in Ayetoro-Gbede, in the local government area.

The state chairman of the Association of Local Governments of Nigeria, ALGON, also accused the Kogi west Senator of “stage-managing an attack in order to cause unnecessary tension in the Council”, adding that it was unfortunate that Melaye twisted the story and accused him of planning to kill him.

Addressing newsmen at his country home in Okoro–Gbede in Ijimu on Monday , Isah explained that he only heard that Dino entered Ayetoro with policemen shooting guns sporadically to scare people, and wondered why he turned around to claim that he was attacked.

He pointed out that as the chief security officer of the Council, it was his responsibility to protect the lives and property of the people, adding that “if Dino cannot improve on the living standard of the people of Ijimu, he should allow them to have peace instead of causing unnecessary distraction.

The ALGON chairman, who alleged that Melaye had never empowered anybody in Okunland which he represents at the Senate, called on the EFCC to probe the IDPs materials he usurped and packed in his house.

“I am using this medium to call on the EFCC and the Presidency to investigate how items meant for IDPs in the North-east got to the hand of a senator who ordinarily is supposed to contribute to ameliorate the sufferings of the people.

“The items, according to information, were packed in his house at Ayetoro- Gbede. EFCC should also investigate and uncover the staff of NEMA who might have aided and abated Dino in that shoddy deal,” he said.

Isah continued: “If you go to some villages, within our local government area, you will notice dearth of basic social amenities. The Governor Yahaya Bello-led administration has made it compulsory to all the councils' administrators to go down to the hinterlands and touch people's lives positively through the New Direction Agenda of the government, and that is exactly what I am doing in my council area.”