Russia warns US against unilateral strike on N. Korea 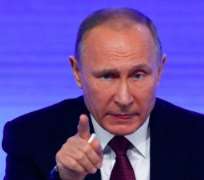 Russia on Monday warned Washington against launching a unilateral strike on North Korea, after US Vice President Mike Pence said the era of “strategic patience” with Pyongyang was over.

“This is a very risky path,” Russian Foreign Minister Sergei Lavrov said at a news conference in Moscow.

“We do not accept the reckless nuclear missile actions of Pyongyang that breach UN resolutions, but that does not mean that you can break international law,” he said.

“I hope that there will not be any unilateral actions like the one we saw recently in Syria.”

Pence on Monday warned North Korea not to test President Donald Trump’s resolve, declaring that “all options are on the table” for curbing its missile and nuclear weapons programmes.

Defying international pressure, the North on Sunday tried to test-fire another missile in an attempt that failed, but which fuelled fears that it may be preparing for its sixth atomic weapons test.

Pence said that the era of US “strategic patience” in dealing with the North was over, after more than two decades.

“In the past two weeks, the world witnessed the strength and resolve of our new president in actions taken in Syria and Afghanistan,” Pence said.

“North Korea would do well not to test his resolve, or the strength of the armed forces of the United States.”