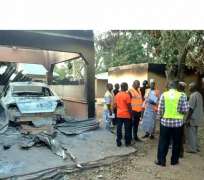 NO fewer than twelve persons were reportedly killed while several others injured in a renewed attack on the residents of Asso Community in Jemaa Local Governments Area of Southern Kaduna by suspected herdsmen. A source, who crave for anonymity said the gunmen invaded the community on Saturday and opened fire on residents of the area.

They shot sporadically as they entered the village the source told our correspondent on telephone. It was learnt that the incident occurred at 6.00pm shortly after a peace and reconciliations meeting between the natives and the Fulani.

Those injured, according to him, were rushed to the Kafanchan General Hospital, in Jemaa LG for medical treatment. The Kaduna Command’s Police Public Relations Officer, confirmed the incident but noted that he was yet to receive details of the casualties as at the time of filing thus report. – Punch