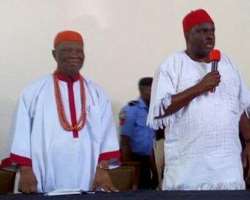 Ahead of the 2019 general election in Delta State, the state governor, Mr Ifeanyi Okowa has sent a delegation of Anioma bigwigs to the former governor of the state, Mr James Ibori to garner support for him.

It was alleged that the governor has released a whooping sum of over N100 million to the delegation which has the Obi of Owa kingdom who doubles as Chairman, Delta State Traditional Rulers Council, Dr. Emmanuel Efeizomor II among other key players.

Obi Efeizomor said the five year absence of the former governor was greatly felt by Deltans, particularly the political class of the Peoples' Democracy Party (PDP) extraction, stressing that his return would change the political landscape of the state ahead of the 2019 elections.

Efeizomor, stated this in Oghara on Friday when he led a delegation of Ndi Anioma to formally welcome Chief Ibori back from London Prison.

The monarch noted that Chief Ibori had closely related with the Anioma nation, having chosen Chief Benjamin Elue as his deputy in his eight years in office as governor.

Dr. Efeizomor recalled the role played by Chief Ibori in the emergence of Senator Okowa as governor of Delta State and particularly thanked him for endursing Senator Okowa for a second term in office in view of his excellent performance so far, even in the face of dwindling resources.

He thanked God for the safe return of Chief Ibori, describing him as an invaluable asset to the state and the country.

Dr. Efeizomor urged Chief Ibori to see his travails in London as a sacrifice towards deepening democracy in the country and assured him of the continued support and respect of Anioma people.

Responding, Chief Ibori thanked Ndi Anioma for the visit and for their prayers and supplications which made his safe return possible.

He said the massive support he received from the Anioma nation in his quest for the governorship seat prompted his choice of an Anioma indigene as his deputy for the eight years he served as governor, adding that his believe in justice, equity and fairness informed his firm support for an Anioma governor which had come to pass with Governor Ifeanyi Okowa on the saddle.

Chief Ibori promised to continue to identify with Anioma people and urged them to remain united and support Governor Ifeanyi Okowa to succeed.

Those who made the delegate list are Chief Benjamin Elue, Chief Nkem Okwuofu, Dr. Chris Agbobu, Chief Theodora Giwa Amu, Traditional Rulers, members of the House of Assembly, members of the State Executive Council from Delta North Senatorial District, among prominent sons and daughters of Anioma Nation were part of the visit.