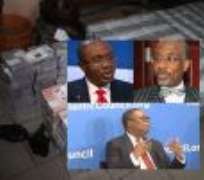 TheCable media has contradicted an exclusive story from PremiumTimes' sources on the "origin" of the recovered $50 million loot ($43.4m, £27,800 and N23.2m) in apartment 7B of Osborne towers, Ikoyi.

While the PremiumTimes article claimed that numerous sources at the Presidency and security agences fed them information that the monies found were delivered by the then Sanusi-led Central bank for “crucial and covert illegal projects,” theCable gave a starkly contradicting report on when and who requested and released the funds.

“Presidency and security sources told this newspaper on Friday that former President Goodluck Jonathan approved the funds for the 30-year old secret service agency after its immediate past Director General, Olaniyi Oladeji, alerted him to the need for some “crucial and covert security projects”.

“The funds were later released in cash directly from the Central Bank of Nigeria as a way of making its spending completely secret.... The projects are scattered across the country, but there is a major one in Lagos being funded with the cash warehoused in the Ikoyi building ... The spending on the projects cannot be subjected to the usual expenditure process, and that is why the funds are held in cash. If you like, you can call it illegal projects in the national interest.”

For Elections in Emefiele/DasukiGate era – theCable

TheCable in its story claimed the monies were released by Central bank governor Emefiele in late 2014 and supposedly intended for diversion towards election purposes.

Quoting theCable and its "sources":

“From what we know so far, funds were indeed approved by Jonathan for the agency in late 2014. But like the monies released for Boko Haram operations, the funds were diverted for non-security use. That is why they ended up in a private residence.

“It appears the funds were diverted for the 2015 elections but some smarter guys kept part for personal use.”

So the general public is left knowing nothing so far, as it seems a cover-up is hurriedly being cooked-up by the agency director who not surprisingly complained to SaharaReporters that he was having a headache.

Who Bought Apartment 7B?
So far it seems impossible for the Buhari government to simply announce who bought apartment 7B.

It is also clear that being that Buhari kept the Jonathan appointed NIA DG, Ayodele Oke on his seat, the NIA head knowing the illegality of such disbursement, will like to spin it on the head of the DG before him whose tenure ran concordant with Sanusi Lamido Sanusi's tenure as CBN governor.

While this transference may protect him from implication in the alleged procurement of said funds, it does not cover him for not briefing the President that his agency was still in ownership of said funds for "illegal" internal projects and that the funds were kept carelessly in a private building for over two-years plus since and before the Buhari government took office.

However most Nigerians are simply not buying all these stories. The opinion on the streets and from street sources at the EFCC and Presidency, is that the money is owned by a top APC ruling party official and that the NIA simply rushed in to cover-up for that individual.

Four days on, a full investigation is yet to be ordered by the "lackadaisical" Buhari presidency. The mint, sealed note packs can easily be traced to rest discrepancies on the timing and purpose of its release by the central bank as stored in the bank's ledgers. There is no evidence this is being done.

The scandal puts a significant dent in the whistleblower program that the nation has been excited about. Already the individuals who blew this whistle are allegedly scared for their lives. Other well-meaning Nigerians may now be afraid that when they blow a whistle, the NIA may swoop in and they will not only not get the reward but their lives may be put at risk.

It can be predicted based on the typical "we-cannot-disclose-this-now," Buhari government's posture on majority of affairs including the identity of the so-called director at the presidency who plagiarized Buhari's speech, that the matter of the discovered $50 million loot will never be properly and openly addressed and the culprits will never be prosecuted.