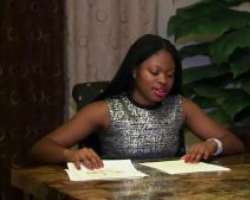 A New Jersey teen has been granted admission to the most prestigious colleges in the United States, ABC News reports.

Although the report does not give the parental background of the infant prodigy, her name Ifeoma is popular among Ndigbo, who the Southeast and some parts of South-south Nigeria.

Principal Todd Toriello told ABC News that Ifeoma has been a student leader throughout her four years at Morris Hills High.

“She understands the importance of giving back to her school service and currently serves the student body as the student government association president,” Toriello said. “As a senior, she’s challenged herself in rigorous course work. … In my relationship with her, she has always been a respectful individual and we are just so proud of her and her accomplishments.

“Whatever school she decides to go to, she will continue on doing great things and will leave her mark on this world and make it a better place,” he added.

Ifeoma’s mother, Pat White-Thorpe, told ABC News that she was not surprised by her daughter’s feat.

“As a little girl, she was a great writer,” she added. “I remember when she was in kindergarten. She spoke on behalf on behalf of the kindergarten class and it blew our minds away.”

In 2015, Ifeoma was named a winner of the national Selma Speech and Essay Contest.

Now that she has plenty of choices, Ifeoma must decide which school she will attend.

Ifeoma wants to study biology and hopes to become a cardiologist, her mother said.