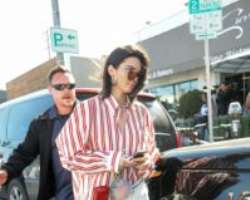 If she had done it just a day later, we might have thought it was an April Fools' joke. But no: Kendall Jenner stepped out in Los Angeles on March 31 wearing one of the most questionable denim trends we've seen in a while, and that's saying a lot .

The 21-year-old model was captured by paparazzi wearing what appeared to be a pair of denim shorts with an oversized, red-and-white-striped button-down Oxford shirt by Balenciaga tucked in asymmetrically, with one panel peeking out the bottom of one shorts leg. But upon closer inspection, it became clear that Jenner had invented a new trend for spring, and it's being dubbed “invisible jeans.”

Attached to the jorts are frayed seams running down the sides of her legs and frayed cuffs around her ankles. Essentially, she's wearing a pair of jeans with the majority of the legs cut out and only a three-dimensional outline remaining. Though you may look at this ensemble and think, “Kendall's a style rebel,” we can't help but feel that even her killer pair of stems could not save this look.

As Who What Wear notes , the look is a pretty simple DIY project if you do, indeed, want to follow in Jenner's experimental fashion footsteps. (Or you can simply wear a pair of denim shorts — we're just saying.) It's unclear whether she created this curious look herself or bought the denim already altered, but the branded seams on the shorts lead us to believe this was a ready-made piece.

Photo: Getty
We have to give kudos to Jenner, though; the girl knows how to make headlines with crimes of denim fashion masquerading as new trends. In summer 2015, the Kardashians' kid sister stunned social media when she wore a pair of baggy, knee-length cut-off jeans shorts that one site dubbed “girlfriend jorts” and “the ugliest effing shorts we've ever seen.”  Luckily, that's a “trend” that never caught on.

She's also been known to wear mom jeans on more than one occasion — and somehow look seriously glamorous in them. It could be because she pairs them with accessories like Stella McCartney platform shoes, off-the-shoulder crop tops, and Balenciaga boots. It's all about balance.

The model baffled people yet again on April 2 by posting a video on Instagram of herself in a pair of jeans that seem to defy gravity, along with a white T-shirt with a simple line drawing of breasts. The tee is actually the Original Boob T by Never Fully Dressed , which supports the “Free the Nipple” movement and donates a portion of the proceeds to Mind Charity , a mental health awareness charity.

According to Teen Vogue , Jenner cleans out her closet once every few weeks (must be nice… also, how can we get on that donation list?). So it's a safe bet that her invisible jeans will be making a complete disappearing act.