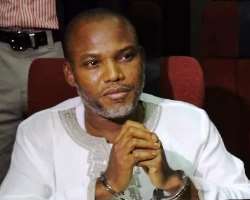 SAN FRANCISCO, March 28, (THEWILL) – A group of senators have called for the release of detained leader of the Indigenous People of Biafra,(IPOB), Nnamdi Kanu and former National Security Adviser, Sambo Dasuki.

Leader of the concerned senators, Chief Mao Ohuabunwa, are said to have concluded arrangements to invoke relevant Senate rules to compel the Attorney General of the Federation (AGF), Mallam Abubakar Malami, to effect immediate release of the duo.

Ohuabunwa has already drawn the attention of the Senate to the continued detention of Kanu and Dasuki despite court orders asking the Federal Government to free them urging the Senate to prevail on Malami to advice President Muhammadu Buhari to free both Kanu and Dasuki the same way he (Malami) advised the Comptroller General of Customs, Col. Hameed Ali, to ignore invitation from the Senate.

Ohuabunwa, who represents Abia North in the Senate, told journalists in Abuja that the continued detention of the IPOB leader and the former NSA despite court orders asking the Federal Government to free them was a gross violation of the fundamental human rights of the duo.

“I still stand by my prayers last week on the floor of the Senate that the Attorney General of the Federation should advice the president to release Kanu and Dasuki the same way he advised the Customs boss to ignore Senate invitation on the ground that the matter was in court,” he said.

“We should have respect for rule of law and I support the call for the immediate release of Kanu and Dasuki.”

He said that the continued detention of Kanu and Dasuki amounted to disobedience of court orders revealing that he was already discussing the matter with some senators to formally draw the attention of the Senate to the long detention of the duo.