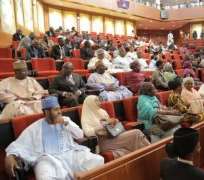 The then Acting President, Professor Yemi Osinbajo, had sought legislative approval for the nominations.

The lawmakers, while speaking on the report by the Senate Committee on INEC at the plenary on Tuesday, pointed out that the Legislature should not approve more nominations by the Executive.

This was due to the failure by the Presidency to remove the Acting Chairman of the Economic and Financial Crimes Commission, Mr. Ibrahim Magu, after his nomination had been rejected by the senate.

President of the Senate, Senator Bukola Saraki, who presided over the plenary, however, pleaded that the confirmation be suspended for two weeks, which was unanimously approved.