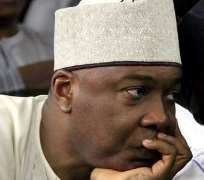 SAN FRANCISCO, March 26, (THEWILL) – The Economic and Financial Crimes Commission, EFCC, has submitted a report to President Muhammadu Buhari linking the Senate President, Bukola Saraki, and some of his aides with the diversion of about N19bn from the N522bn Paris Club refund.

Also fingered in the report is Mr. Robert Mbonu of Melrose General Services Limited. He is a former Managing Director of Societe Generale Bank of Nigeria, the commercial bank owned by the Saraki family which was later liquidated.

Last December, the Federal Government approved the sum of N522.74bn to be paid to the 36 states of the federation as part of the reimbursement of the over-deduction on the Paris Club loan from 1995 to 2002.

The EFCC had sometimes in January discovered that the loan refunds were illegally routed through the account of the Nigeria Governors Forum, NGF, by the Central Bank of Nigeria, CBN.

The Punch reports that upon receiving the funds, the NGF began remitting huge sums to private consultants who then laundered about N19bn, in an alleged connivance with Saraki.

According to the report, apart from the NGF, others under investigation include the Relationship Manager to the Senate President in Access Bank, Kathleen Erhimu.

Some others under probe and identified as Saraki's aides include Obiora Amobi, Gbenga Makanjuola, Kolawole Shittu and Oladapo Idowu.

The report alleges that sometimes in December, Saraki introduced the ex-bank MD, Mbonu, to Erhimu. Others at the meeting were Saraki's aforementioned aides.

It added that sequel to the meeting, the sum of N3.5bn was lodged into Melrose General Services Company account number 0005892453, domiciled in Access Bank from the NGF on December 14.

The report stated that two of Saraki's aides, Obiora Amobi and Gbenga Makanjuola, were introduced to Access Bank as representatives of Melrose General Services Limited by Mbonu to enable them to make cash withdrawals from the account.

It added that Amobi and Makanjuola made cash withdrawals in various tranches of N5m and N10m.

The report reads in part, “Based on the foregoing findings, it is clear that Robert Mbonu, the Managing Director of Melrose General Services Company and his company were used to help divert proceeds of unlawful activities under the guise of payment for contractual obligations with the Nigeria Governors Forum.

“Suffice to apprise that all payments received by Melrose General Services Company from the NGF have hitherto been diverted directly via cash withdrawals and indirectly through transfers by Gbenga Peter Makanjuola, Kolawole Shittu and Oladapo Joseph Idowu, who are principal aides to the Senate President.

“Furthermore, other payments from Melrose General Services Company have also been linked to companies that Dr. Bukola Saraki has interest in and carries out transactions with.

“This includes the sum of $183,000, which was transferred to Bhaska Devji Jewellers, Dubai, a company Dr. Bukola Saraki had repeatedly made payments to.

“Also, the sum of N200m was transferred to Wasp Networks Limited that subsequently transferred the sum of N170m to Xtract Energy Services Limited, a company that routinely made deposits into Dr. Saraki's Access Bank US Dollar Domiciliary account.”

The report concludes that a prima facie case of conspiracy to retain the proceeds of unlawful activities and money laundering, contrary to sections 15(3) and 18(9) of the Money Laundering Prohibition Act 2004, could be established against the aforementioned suspects.

“Additionally, investigation into their personal accounts is ongoing,” the newspaper quotes the report as adding.