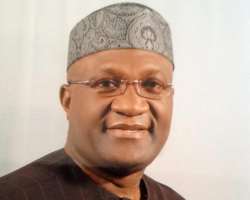 President General of Ohanaeze Ndigbo, Chief John Nnia Nwodo, has declared that the struggle for restructuring of Nigeria is more important than the agitation for Igbo presidency in 2019.

Chief Nwodo spoke during a dinner organised in his honour by Old Sigmites, Lagos chapter, a club founded in 1950 at the University of Ibadan.

The Igbo leader also objected to the killing of unarmed members of the Indigenous People of Biafra (IP OB) and the Movement for the Actualisation of the Sovereign State of Biafra (MASSOB).

He wondered why the youths, who were clearly not happy with the unfair treatment being meted out to them in a country that is supposed to be theirs, were brutally killed.

Insisting that the youths did not warrant being killed, Nwodo also berated the Federal Government over continuous detention of IPOB's leader, Nnamdi Kalu.

'The agitation for Igbo presidency in 2019 is a non issue as far as I am concerned. As the president of Ohanaeze Ndigbo, I am apolitical, I am not a member of any political party.

'This is an issue for political parties, it has nothing to do with me. The issue of power rotation among regions is not new, it is some how aligned with the doctrine of federal character which is in our constitution.

'No party has called for nomination. I don't think agitation for Igbo presidency is important now; what Nigerians are asking for is restructuring of the country to be a true federation. It cannot continue to be a federation in name, the political lexicography for federation is an independent federal unit.

'The moment you have independent federal unit, being state or regions and they have control over the resources they produce, they will contribute on agreed proportion to the Federation. The question of who is president and  where he comes from will die down. It is going to be a matter of who is competent.

'MASSOB and IPOB organisations, no matter how divided they appear in public, are basically motivated by the same sense of outrage and bitterness. Our young men and women can no longer tolerate a second class status in their own country,' he said.

Other regional leaders present on the occasion and also championing the cause of restructuring the nation are Niger Delta elder statesman, Chief Edwin Clark and a Yoruba leader, Chief Ayo Adebanjo.

Chief Clark, who did not also hide his feeling on the issue of restructuring, said the current situation of the country is not a legacy left behind by people who fought for the independence of Nigeria.

Chief Adebanjo also aligned  himself to the submission of his co leaders, he said the country was sitting on a time bomb, if the issue of restructuring was not addressed. In his address, the president of Old Sigmites, Lagos, Dr. Faye Iketubosin said the association honoured Nwodo for his outstanding contributions to the society and for his current position in Igboland. - The Sun.