Suicide: Police foils another attempt by woman to jump into Lagos lagoon 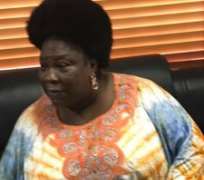 Taiwo Momoh, the woman the police  in Lagos stopped from committing suicide today has said a debt burden of N18.7million was the main reason she wanted to do it.

Lagos State Commissioner of Police, Mr Fatai Owoseni, told newsmen in Lagos that Momoh was in a taxi heading toward Oworonshoki on Third Mainland Bridge when she told the taxi driver to stop on the bridge.

Owoseni said the woman was about to jump into the lagoon when a police patrol team on a routine patrol sighted her and held her before she could do so.

“She attempted suicide by trying to jump into the Lagoon around Oworonshoki inwards Mainland on Third Mainland Bridge, but she was rescued,“he said.

The commissioner said from his interaction with the woman, she had depression as a result of unpaid loans and insisted that she wanted to end her life.

The 58 years old woman in an account published by P.M.NEWS said her indebtedness to the tune of N18.7 million to her Swiss partner forced her to want to end her life.

The lady, who lives in Lekki Lagos, disclosed that she was pushed to committing suicide in order to put an end to her constant sleeplessness and shame occasioned by her indebtedness to three Swiss textile dealers.

She noted that her problem started sometimes in 2015, when a Bureau De Change dealer carted away her N18.7 million she wanted to change to pay her foreign creditors.

She added that the creditors had given her Swiss textiles worth several millions of naira, noting that she had maintained good relationship with the creditors for more than 15 years.

Her condition, she said became compounded when robbers invaded her shop on Lagos Island carting away most of the textiles that was left with her.

Momoh said that most of the time, she has been having sleepless nights and seeing the ghosts of the creditors whenever she was alone.

Momoh, a member of the Redeemed Christian Church of God, RCCG, disclosed that on several occasions she had attempted to see her Parish Pastor to identify with her problem and for the church to help her raise money to meet her Swiss creditors in order to assure them that she would pay their money.

She noted that she was only allowed to see the second in command, which had yielded no fruits.

“Added to all these, my first son, whom I felt would stand by me and console me abandoned me. By the time I'm gone, maybe he would come around and inherit what is left. I don't want to use my debt and death to disturb anybody. I was in the shop this morning. I have looked everywhere and estimated what is there.

“I think, with my house, a bungalow, those I am leaving behind can still live comfortably. I want to go and meet God. This world is empty”, she stated.

“I won't because I want to get rich join cult group. I go my way and I don't socialize unnecessarily. I was a Muslim, I have because of this problem been jumping from one faith to the other. The problem is too much for me to bear. I want to go back to God.

“That is why I have dressed very simply. I am ready to meet Him. If He cannot address my problem on earth, let me go back to Him,” she narrated

He said the woman would be taken through post-trauma programme to ensure that she had hope and not commit suicide.

The commissioner said that the police would do a medical evaluation on her to ascertain her condition.

Owoseni said that the police had begun the patrol of bridges across the state to forestall other suicide.

He said henceforth, it would be an offence for individuals to walk on bridges in the state, and that no vehicle would be allowed to stop on any bridge to prevent suicides.

A medical doctor, Allwell Orji,  jumped into the Lagoon from Third Mainland Bridge on Sunday.

The Lagos State Emergency Management Agency, LASEMA, said the late doctor's body had been recovered  by the Marine Police.

Adesina Tiamiyu, General manager of LASEMA, said the body was identified and confirmed as his by family members of the late doctor.

“The body was identified by some of his family members including the driver in the presence of the commissioner of Police, Lagos State, Mr Fatai Owoseni,” the LASEMA boss said.

NAN also reports that the Lagos University Teaching Hospital, LUTH, Idi Araba, has initiated a Suicide Prevention Service to check the spate of suicide cases in the country.