WHY THE TWO SAMUELS ARE RARE SPECIES 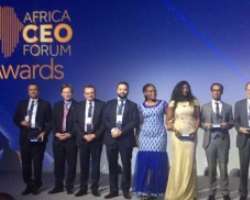 In faraway Geneva, Switzerland, in Western Europe, over ten dozen top Chief Executive Officers of blue-chip Companies operating on the Black African continent are about now rounding up their meeting with the objective of uncovering the magic wand for the rapid industrialization of Africa.

These egg-heads plus a mixture of politicians from Africa had originally set out to find out the new most workable economic models to turn around the continent currently ravaged by hunger, mass poverty and conflicts.

Ironically, somewhere in between their dialogue sessions, a prosperous African born but Europe based billionaire Mr. MO Ibrahim convinced them to change the focus of deliberations to a much more pressing issue- lack of good governance.

One striking factor out of their constructive dialogue was the unanimous conclusion that the most critical needs of the African continents are not economic models or absence of such but that what is lacking grossly in Africa is good governance.

Although, I am uncomfortable that these African business leaders did not behave wisely by holding this sort of a key meeting outside of the shores of Africa, but in my philosophical belief that it is better to analyze the message and avoid paying so much attention to the messenger, it is strategic to affirm that the assertion of these African business leaders is factually correct.

This important call by respected business and socio-economic leaders for effective decentralised political systems at the forum where more than 1,000 chief executives of leading organisations are seeking sustainable solutions to Africa’s economic woes would sure put pressure on weak governments and encourage prudent management of resources.

The above were reports of The Nigeria guardian newspaper whose group news editor is reporting live from the meeting venue.

Mercel Mbamalu had captured the nitty gritty of that high profile meeting in such a manner that a reader in Nigeria would nostalgically ask question about why Nigeria's political space is no longer dominated by leaders with sterling qualities such as the two most famous SAMUELS- Chief Samuel Mbakwe and General Samuel Ogbemudia.

Well let's revisit that strategic African business parley in Geneva whereby we were told by The Giardian reporter that whilst responding to the moderator’s question on what he represents in the African economic model, Mo Ibrahim had sought to modify the theme of the conference – “Re-inventing the Africa Business Model” – on grounds that transparency should be much more important to the continental administrations than any economic model.

“Africa is not a company. It is made up of 54 countries,” he noted, describing the situation as a “big elephant in the room.” The philanthropist argued that what the continent needs are “countries with no corruption. An Africa that is more transparent with open governance.”

This perspective reminds us of the indubitable fact that leadership legacies shape public opinions in a very formidable way.

In that line Mr. Julius Olu Odetunde who wrote a book tittled: "Teach yourself Yoruba proverbs and idioms in English language”, reminds us of a particular Yourba proverb.

This proverb warns that if one assumes or hold the reins of government or any other leadership’s post in life, one should strive to do good, because whatever we do today whether good or bad will soon become history.

The above mentioned facts are tangential to the essence of our reflection today on the good leadership models exemplified by two great and indeed iconic Nigerian SAMUELS who were governors namely chief Samuel Onunaka Mbakwe of the then old Imo State and General Samuel Ogbemudia of the then old Bendel State, both have joined the saints triumphant.

Then putting the lofty goals achieved in their leadership positions with the total absence of good governance in the 36 States of the Federation and the Federal Capital Territory, it is safe to assume that the duo of Samuel Ogbemudia and Samuel Mbakwe are indeed rare political species.

Both Statesmen being discussed were not even fortunate enough to control the humongous federally redistributed allocations which the current set of Governors do get but long after they left offices, even the most irrational observer is singing their praises because of how so well they impacted positively in shaping and building lasting legacies and durable infrastructures that have stood the test of time and indeed are still seen as reference marks of good governance.

In the old Imo State which comprised the present day Abia and parts of Ebonyi State, the Governor, Mbakwe was known to have erected massive canals in Aba, and built rural roads all-round the State.

He (Mbakwe) was not known to have refused to pay civil servants or pensioners but what do we have in place now in Imo State under Mr. Rochas Okorocha is the direct opposite. In Imo State now, civil servant are owed long backlogs of salaries and pensioners are not paid. Institutions that should ensure transparency and accountability have gone to the dogs.

In Imo Sate, the State House of Assembly Members are known to be lackeys and 'houseboys' of the Imo State Governor because these persons have spectacularly failed to provide oversight functions and have not exercised their constitutionally guaranteed powers to check Executive recklessness.

Edo which now represents the old Bendel which then included Delta State, it is clear that lack of good governance has directly resulted in the high crime rate. Adams Oshiomhole who was a labour union leader in Abuja and rode on the back of the media hyped propaganda to win election as governor of Edo state spent eight years and only succeeded in building white elephant projects.

Failure of good governance in Edo under successive administrations after Ogbemudia has made broad-day light robberies and assassination of prominent persons have become a daily occurrence because those who govern Edo are mostly not concerned about good governance but are most of the times seen dramatizing on the pages of newspapers and broadcast media showcasing fake projects which are at best white elephant projects.

Delta is not different from Edo in terms of gross lack of good governance. The other day, the newspaper reported that the Members of the State House of Assembly were engaged in free -for -all even as no meaningful law making process is ongoing in DELTA state which used to be part of the old Bendel that the departed Statesman left imprints of excellent leadership.

Ogbemudia erected wonderful structures such as stadia and University that met international best standards. His successors allegedly diverted public institutions into private ownership through the dubious practice of monetisation.

Chief. Mbakwe built big structures and revolutionised agriculture. Mbakwe made it easy for micros, small and medium scale investors to see Aba as center of Excellence. Not any more except the people put pressure on their current helmsman to make hay whilst the sun shines.

But corruption in political office is stealing the shine off public service.

Talking about corruption amongst the political elite of what constituted the erstwhile Bendel and Imo States, it is lamentable that virtually all the previously elected Governors from 1999 to date have had to be dragged to courts by the Economic and Financial Crimes Commission for theft of public fund.

The quality of leadership by the Governors of these other States is not much different because only few weeks back a state high court in Adamawa State sentenced the immediate past Governor James Bala Ngilari to five years in jail for theft of Adamawa State money.

Ngilari's predecessor- the predecessor to the new jailbird and erstwhile Adamawa State Governor Alhaji Murtallah Nyako a retired Navy General is right now being dragged to the Federal High Court Abuja division by the Anti-graft Commission for alleged theft of public fund.

But why are the current Governors not striving to be like such good Statesmen like the duo of Ogbemudia and Mbakwe- Nigeria's two best SAMUELS?

Why are the current Governors working so hard to divert more public fund to their pockets and not keen on working to deliver services and work for good governance?.

A particular governor- Kebbi state governor is said to be a fugitive from the US legal system for charges of money laundering but he is wielding political power in the party that produced President Muhammadu Buhari.

The other day, some serving governors were accused of diverting huge foreign denominated cash refunded to the states from the paris club.

The Economic and Financial Crime Commission (EFCC) has accused the Members of the Nigerian governors Forum of outright theft of these huge cash paid to them from the Federal Ministry of Finance on the directives of the President.

But wait a minute: It took the disclosure by Senator Dino Melaye of Kogi state in the Green Chambers of the National Assembly for Nigerians to even know that there is something called Paris Club’s Refund to Nigerian states.

These governors who pocketed the huge cash are still not meeting their statutory obligation of even paying salaries.

An unpardonable outrageous amounte of N388.8 billion of London-Paris Club Refund was diverted by 7 Governors according to the EFCC.

In one account, the EFCC saw N19 billion. The question begging for an answer is why President Muhammadu Buhari who only few days back returned back to Nigeria after 50 days of medical tourism in London has Okayed that another N500 billion Paris/ London club refund be distributed to Governors.

Anyway, our concern in this piece is how to restore the legacies of good governance which the duo of Ogbemudia and Mbakwe bequeathed to us so our generations yet unborn will not cling on to the bad examples of the current Governors.

Known more for his many enduring projects for Imo people, it will be recalled that in 1981, Sam Mbakwe set up Imo State University.

The campus as observed was located in a territory that was ceded to Abia State in 1991 and was re-christened Abia State University. However, Imo State University acquired a new campus in Owerri and still exists. Mbakwe was well educated and well behaved.

Samuel Ogbemudia was born in Benin City. As a youth he was said to have lived with his elder cousin, Mr. FS Uwaifo, a Benin-based businessman. He too got vast education.

As can be seen, one of the Samuels was military whilst the other was civilian but both distinguished themselves showing that good people abound in all professions.

But how did we go wrong? And as Professor Chinua Achebe will ask: ' when did the rain began to beat us’? Nigeria needs governors with the attributes and qualities of these two Samuels. Nigeria needs good governance. We must build vibrant institutions that would be independent enough to exercise their constitutional oversight functions of providing checks and balances on the executives. It's time to end the perennial executive rascality and recklessness of these governors who see themselves as demigods.