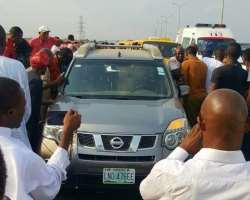 The body of a medical doctor who jumped into the Lagos lagoon on Sunday has been recovered after days of intensive search.

Dr Allwell Orji's remains were recovered around 4 p.m. on Wednesday by the Marine Police.

The Lagos State Commissioner of Police, Mr Fatai Owoseni, said that the body was identified by some members of his family, including his driver.