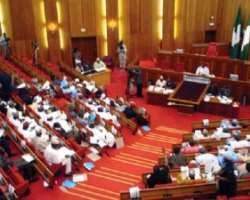 The approval was given by the Senate following an Executive Communication from the President that the lawmakers do consider the request of Mr. President C-in- C for the approval of the $500 million, Eurobond in the International Capital Market for the funding of the 2016 Budget Deficit.

Earlier, deputy Senate leader, Senator Bala Ibn Na'allah asked that the Senate should resolved to the Committee of the whole to approve the request because of the urgency of the matter.

In supporting the motion, Senate Minority leader, Senator Godswill Akpabio said that inspite of non consultation, he was agreeing to it because of the urgency of the Eurobond to address the problems of the country for the overall interest of Nigeria and Nigerians.

It would be recalled that the Presidency had in February sought the approval of the National Assembly to raise additional $500 million eurobond from the international capital market.

Vice President Yemi Osinbajo while in acting capacity had in February 22, 2017 in a letter then explained that the fund would be used to finance the total sum of N4.023 trillion budget deficit in the 2016 and 2017 fiscal years respectively.

'Following the high oversubscription of the recent USD 1 billion eurobond issuance, we wish to take advantage of favourable market conditions to issue a eurobond debt instrument of USD 500 million to fund the implementation of the 2016 budget, which is still ongoing.

'You may wish to note that in line with the requirement of securities issuances in the ICM, a specific resolution of the National Assembly, as a firm confirmation of the approval of the Legislature for the Federal Government of Nigeria (FGN) to borrow the USD 500 million through the issuance of a eurobond debt instrument in the ICM is required,' the Acting President informed the Parliament.'

The Vice President had assured that the proceeds of the eurobond would be used as funding sources to finance the budget deficit, including capital expenditure projects as specified in the 2016 Appropriation Act.

'The debt management office and the Federal Government's appointed Transaction parties to the issue are committed to working assiduously to secure the best terms and conditions for the Federal Republic of Nigeria.'

According to Osinbajo, the Federal Government planned to issue the eurobond between February and March 2017, subject to market conditions, in order to meet the Government's approved capital expenditure funding plan.