UK ELECTION: ANY LESSONS FOR NIGERIA? 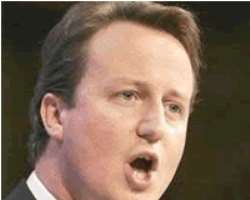 Cameron
The recent general election in the United Kingdom has come and gone but the lessons would ever remain for posterity. Though many would argue that for the developed nations, there may not be much to learn from the tension-soaked election but that is certainly not the case with emerging democracies, especially Africa.

The poll into the House of Commons, once again proved that in a democracy, the majority would always have its way even though the minority would have its say. It was one exercise that showed that election should not be a do-or-die affair as in this clime. The election exposed the supremacy of the interest of the nation above that of self or a cabal as in Nigeria.

For critical observers, what transpired in that election should guide Nigerian politicians, power brokers and the electorate to do the right thing.

But the question is- Are Nigerians ready to change their attitude toward elections or do they want the status quo to remain?

Analysts argue that the success of the next election would be dependent on the commitment of President Goodluck Jonathan and his relatively new team to the project. Many hope that those in position of authority would turn a new leaf and approach the election with the collective interest of the people in mind.

The heart-searching resignation statements by the immediate past British Prime Minister, Gordon Brown as he left the 10 Downing street after his party, the Labour Party (LP) failed to win majority seats in the just concluded general election in Great Britain should be a lesson for all Nigerians especially the leaders.

He had said, 'It was a privilege to serve. And yes I loved the job, not for its prestige and its titles and its ceremony, which I do not love at all. No, I loved the job for its potential to make this country I love fairer, more tolerant, more green, more prosperous and more just — truly a greater Britain'.

The election which held on Thursday, May 6, 2010 to elect members to the House of Commons took place in 649 constituencies under the first-past-the-post system. The Conservative Party under David Cameron predictably won the largest number of votes and seats, but was 20 short of the 326 seats required to have an overall majority. It was the first time since 1974, and only the second time since the Second World War that such an election returned what is referred to as a hung parliament in Britain.

As a result of the deadlock, only a coalition was the way forward. And on May 11, as coalition talks between the Conservatives and the Liberal Democrats seemed to be drawing to a successful end, Brown announced his resignation as Prime Minister, marking the end of 13 years of Labour government. David Cameron became his successor following Queen Elizabeth II's acceptance of Brown's resignation.

But the issue is not the resignation of Brown but the spirit behind his decision. Definitely, a country in search of democracy and good governance like Nigeria has a lot of lessons to learn from the keenly contested parliamentary elections.

So, as Nigeria prepares for her general election in 2011, critical observers are wont to juxtapose it with that of United Kingdom. Many believe that there is much for Nigerians to learn from the experience.

Give and take
That politics is a game of compromise gained expression in the recent UK election. Among the three contending parties of Conservatives, Liberal Democrats and Labour, none could win the required majority seats to form the government. What it showed was that unlike in Nigeria, the incumbency factor did not confer any undue advantages on Brown and his Labour party.

Whereas in Britain, there was a level playing field for all parties in contention, in Nigeria, it has always been the opposite with the ruling party taking advantages of its position to lord it over others. Since 1999 that democracy was reintroduced in Nigeria, the Peoples Democratic Party (PDP) has literally eclipsed the opposition. Analysts argue that though Nigeria has about 58 parties, the reality on ground is that it is the PDP and others.

While politics here is a do-or-die affair, in UK, what matters is the collective interest of the people. Over the years, politics in Nigeria has been a game of 'winner takes all' while in UK, the recent election and how the government emerged out of a consensus between the Conservative Party and the Liberal Democrats showed that politics is a game of numbers and one of compromise.

Democracy in action
Despite the level of competition among the three main political parties, a spirit of sportsmanship prevailed in their actions before and after the elections. None of the candidates including Brown, the incumbent, was desperate for power. The idea was to win the election and not to 'capture it'.

There were no reported cases of rigging, manipulation of the votes, intimidation of the electorate and violence including outright assassination of opponents.

Throughout the period of campaign and election, there was room for alternative views unlike in Nigeria where opponents are viewed as enemies. Ahead of 2003 general election in which former President Obasanjo was re-elected amid controversy, many perceived political opponents including the former Minister of Justice and Attorney General, Chief Bola Ige were assassinated. Such practice was never obtainable throughout the period of campaign and election in the United Kingdom.

Politics of issues
The campaign was based on issues and not persons. What happened in UK was quite unlike in Nigeria where the ultimate preoccupation of politicians and parties is to grab power at all cost.

In UK, the campaign was based on issues as the Labour Party campaigned for a fourth consecutive term in office and battled to restore support lost since 1997 while the Conservative Party struggled for dominance after losses in the 1990s. For the Liberal Democrats, they hoped to make gains from both sides and to hold the balance of power in a possible hung parliament. The parties delved into several issues particularly the economy and foreign policy including the wars in Iraq and Afghanistan.

In Nigeria, all the parties seem to be the same with none having any identity in terms of ideology and manifesto. It was not surprising that since 1999, majority of members of other parties have defected to the PDP which is the ruling party. Many believe that Nigerians play 'politics of the stomach' and not of issues.

The country before self
In the estimation of many, the UK election was a proof of the supremacy of the national interest above that of self. This is not the case in Nigeria where the nation is sacrificed on the altar of self aggrandizement. Many believe that part of why Gordon Brown resigned was to ensure that the polity was not subjected to undue tension arising from the election eventually won by Cameron, the new Prime Minister of Great Britain.