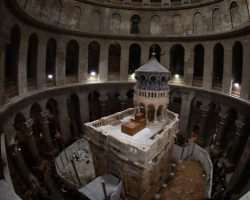 The Church of the Holy Sepulchre has announced the completion of its extensive renovations to the tomb of Jesus. The religious site in Jerusalem has been under reconstruction since May 2016 but work finally came to an end on 20 March.

The project was carried out by a team of Greek specialists who reconstructed the Edicule — the protective structure over the shelf on which the body of Christ is said to have rested following his crucifixtion. The covering had been supported by metal beams since an early 20th century earthquake and required reconstruction. It included restoration and cleaning of the structure and led to the discovery of its original details.

Researchers were also able to uncover the original surface of the tomb of Jesus, which until recently was covered by a thick layer of marble. According to National Geographic, this was the first time since at least 1555 CE that the tomb had been revealed.

The restoration was sponsored by the Greek Orthodox, Franciscans and Armenians — the three main Christian denominations of the six that share the Holy Sepulchre. Contributions were also given by a number of public and private entities. The total cost of the project was approximately $4m (£3.2m).

The site will be inaugurated on 22 March — an event that will be attended by various political and religious leaders from Greece, along with the Holy Land clergy.