Gani Adams: Two Years On The Road Of Infamy 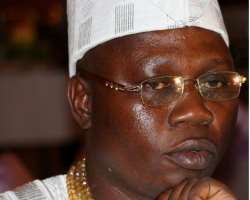 It has been two years that Gani Adams deliberately dismounted from

the great height of fame to that of infamy. For selfish reasons, he

abandoned a well-laid table of greatness to dine in the sewers. Gani

Council of Oodua Peoples Congress, OPC, passed a vote of no confidence

daughters on the altar of politics by organising anti-Jega rally.

ANTI-JEGA RALLY BY GANI ADAMS
On March 17, 2015, Oodua Peoples Congress, OPC at the behest of Gani

Adams and against the approval of the National Coordinating Council of

removal of Professor Attahiru Jega as the chairman of Independent

National Electoral Commission (INEC) of Nigeria.
Like it is often said that, ‘there is no smoke without fire’, Gani

the 2015 presidential election. While speaking with journalists on the

motive behind the rally, Gani Adams was again economical with truth.

He never admitted to receiving any money from Jonathan but only

admitted that OPC had been awarded a "Pipeline Protection" contract

that would see him employ 15,000 Yoruba youths.
For those of us in the know and who have evidence that Gani Adams took

money for the protest; we immediately issued a statement

disassociating ourselves from the anti-Jega rally. We believe that OPC

as a Yoruba pressure group should be non-partisan.
OUR STAND ON ANTI-JEGA RALLY BY GANI ADAMS THEN
We, the members of the National Coordinating Council of the Oodua

People’s Congress, OPC, the highest ruling body of the organization,

wish to disassociate ourselves from the shameful, destructive,

violent and reactionary activities of the Gani Adam-led team which

occurred in Lagos today. What was witnessed today in Lagos was the

highest level of political violence sponsored and funded by certain

elements in the Jonathan government.
Gani Adams is on his own and does not enjoy the support of a large

size of our membership spread across the country. He is working for

elections not to hold. Unleashing terror on innocent citizens and

killing them is not the way of democracy. It is not our idea of a

people-oriented advocacy.
Gani Adams is on dubious project. He is using the Pipleline contract

work for Jonathan and PDP in the South West. Gani Adams is acting

against Yoruba interest. The compromises he has made amounts to

contract to line his pockets. OPC is not about Pipleline contracts or

any other contracts for that matter. The Yoruba interest is beyond

contracts. We seek justice and fairness from the current government.

We, members of the National Coordinating Council of the Odua People’s

stand with us in totally condemning Gani and his anti-democratic

tendencies. We must renounce him and remind him he cannot sell the

Yoruba race to Jonathan and PDP on the cheap. He also has no authority

to speak on behalf of the Yoruba people. We pity those who rely on him

to win votes. They will be sorely disappointed. Their investment is a

bad one already. We reject today and always any attempt to use our

organization and its members for narrow and selfish partisan purposes.

sweeteners. No one will expect the larger Yoruba people to follow an

individual who is a Lilliputian in the political development and

history of the Yoruba nation. The Yorubas are politically

sophisticated people and will simply ignore political opportunist like

Gani Adams. We renounce him and his activities which are against the

larger Yoruba interest. We renounce all other Yoruba sons and

daughters who are playing roles inimical to the welfare and interest

the larger Yoruba nation.
We call on our people to be vigilant politically at this time. Nigeria

needs a new leadership, a new direction and a country that works.

BEFORE AND AFTER 2015 PRESIDENTIAL ELECTION
Prior to that 2015 presidential election, Gani Adams also promised to

Jonathan; a promise which never came to pass as it only became

Jonathan’s albatross in the Southwest.
“OPC is a group of six million people. We sat down at our National

Coordinating Council to decide on who to vote for between President

Jonathan and Buhari and the support for Jonathan is unanimous.

“Now, we have come out to support Jonathan because of the National

Conference. We have been clamouring for National Conference since

1992, even our leaders could not organise it. President Olusegun

Obasanjo organised the National Political Reforms Conference with a

lot of no-go areas. In the end there was a stalemate. ”Now a minority,

Jonathan, did it. The only no-go area is the unity of the country. He

gave us open cheque to decide the future of Nigeria.”

Adams had on many occasions publicly justified his political bias for

the PDP and Jonathan. He got contracts to print PDP posters for the

Buhari and governor Ambode of Lagos State among others. Who now is the

politician between us and the con artist called Adams?

The truth which is glaringly evident is that, Gani Adams has done far

worse than his predecessor. He is not just romancing with politics,

but has fully plunged into it head over heels.
GANI ADAMS’ MANY CRIMES
It is on record that the only crime Dr Fredrick Faseun committed

which he did not disclose to executive members of OPC. That was why we

replaced him with Gani Adams.
Unfortunately, over three thousand members lost their lives in the

supremacy battle that followed the removal of Faseun and subsequent

what Faseun did before we removed him. Gani Adams has attempted to

occasions. His recent incitement of members against Akinpelu was when

he showed up in Ibadan to celebrate a ‘kangaroo Oke-Badan festival.

politics; he has not brought any commensurate gain to the

organization. Unfortunately for those myopic people who are following

him today; he is the only one acquiring properties and many luxury

cars while the average member remains pauperized.
Adams has refused to respond to the allegations of misappropriation

of OPC funds among other sundry allegations we levelled against him.

against us in the press, Adams should do the needful and either come

which he claims as his father’s village, but which we doubt, because

the surname he uses itself, is from his mother’s side.

One Oguntimehin who turned into Adams spokesman overnight even claimed

in one his releases that ‘five organizations with “noble

responsibilities” have been birthed’ from the OPC.

The first, the Oodua Progressive Union (OPU) is nothing more than a

means through which Adams intends to swindle people in the Diaspora

much like he has done within the country. The question is, how many

is nothing more than a con venture?
Secondly, and as stated earlier, Gani Adams does not realize that

there is a difference between his person and the OPC as a group. This

in listing Gani Adams Foundation (GAF) as a part of the OPC. Millions

philandering activities without any returns or benefits to the

organization. For avoidance of any doubt, Gani Adams Foundation and

On the matter of the Oodua Economic Empowerment Initiative, we make

introducing the scheme, members where told to open bank accounts as

well as presenting two identity cards issued by the organization.

Since that was done almost a year ago, nothing has come of it, as no

Adams claims. We stand to be corrected on this issue.

The Oodua Research Centre mentioned by Adams mouth-piece exists only

as a figment of the imaginations of Oguntimehin and his boss. If this

is not the case, let both men tell the whole world when it was

created, what activities have been undertaken by the body and where

such took place since it was created.
As for the landed property at 13 Olusoga Street, Mushin, Lagos which

Adams alleged he personally donated to the OPC in 2004, nothing could

be farther from the truth than this bare-faced lie. The land has been

the venue of our weekly meeting since the late 1990s. It is the scene

of many skirmishes with law enforcement agents. Because of its

intrinsic value to the OPC and its early history, a decision was made

to acquire the land for the organization. This was done with the aid

of one Pa. Augusto of Lawanson area, Lagos for the princely sum of

four million naira which was contributed by members of the OPC. This

Oke-Alo area, Anthony Village, Lagos as against the claims of

Oguntimehin and his boss. There are many living witnesses to that

transaction and we challenge Gani Adams to prove otherwise.

OUR DEMAND
Our demand of Gani Adams is simple; stop bastardising our collective

heritage and leave the OPC for genuinely committed members. Whatever

grouse or axe he has to grind with anybody, Adams should find a way of

settling his personal scores personally, rather than foisting it on

the group as a whole.
We equally demand that Gani Adams come out to defend his academic

certificates which we know he obtained through fraudulent means.

daughters as a leader; Gani Adams has failed to acknowledge the

ethical dimension of his problems. Even with a heavily deflated house;

image reflected from a pool of water.
It has been two years that Gani Adams began his infamous journey to

infamy. And today, he has reached his destination where no attempt by