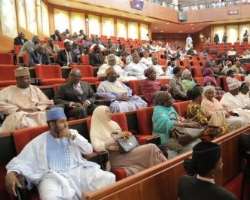 The Senate, on Tuesday, decided to investigate the allegation that an armoured Range Rover car said to worth N298m and seized by the Nigeria Customs Service belongs to the President of the Senate, Senator Bukola Saraki.

The move was based on a point of order raised by former Majority Leader of the Senate, Senator Ali Ndume, who also called on the upper chamber of the National Assembly to investigate the certificate scandal involving Senator Dino Melaye.

An online news porta which made the allegation in a report published on March 18, 2017, said the seizure of the Sports Utility Vehicle (SUV), allegedly belonging to Saraki, was the reason why the Senate was moving against the Controller General of the NCS, Col. Hammed Ali (retd.).

The medium reported that the car was intercepted and impounded on January 11, 2017, by the service for allegedly having fake documents.

Sahara Reporters had also in another report alleged that Melaye did not graduate from the Ahmad Bello University Zaria, Kaduna State, but was parading a fake certificate.

Ndume, at the plenary on Tuesday, said previous certificate scandals involving members of the National Assembly were probed by the lawmakers.

He said, 'One has to do with the distinguished Senator Bukola Saraki, the Senate President, and it was reported in a paper; I have it here. With your permission, I will want to, after making presentation, lay it down. It says that, 'Senate on Vengeance After Nigeria Customs seized Senator Saraki's bullet-proof Range Rover Over Fake Documents.'

'My colleagues that are following events, particularly online, have seen, heard or read the train of abuses on this Senate and the misconception of the fact that we invited the Customs CG based on a very unpopular policy that affects the people we represent. But now, we are faced with this and the (Senate) President has been found in this National Assembly.

'Now, that brings me to the second matter. In the National Assembly, here in the Senate of the 4th Assembly, Enwerem was accused and it was also investigated. Wabara was accused of collecting bribe and it was investigated and determined. So, a lot of precedences have been set. Now, the second matter of privilege affects my colleague, Sheikh Dino Melaye, and it is in the Punch of today (Tuesday) on Page 10; I have the newspaper. In Punch, it says, 'Dino Melaye in first-degree certificate scandal.’'

Ndume also quoted an online medium with a report titled, 'Dino Melaye Allegedly Did Not Graduate From University.'

He added, 'Therefore, accordingly, I will appeal we refer the matter to Ethics and Privileges to investigate so that our colleagues would be cleared and this Senate will stand as it is supposed to.'

Deputy President of the Senate, Senator Ike Ekweremadu, who presided over the plenary, referred the matter to the Committee on Ethics, Privileges and Public Petitions, which was asked to report back to the lawmakers in four weeks.

Saraki, however, denied any link with the seized car.

The Special Adviser to Senate President on Media and Publicity, Mr Yusuph Olaniyonu, in a statement, stated that the allegation 'lacks basis as it was outright falsehood.'

Olaniyonu said from the facts and documents about the seized vehicle, it was obvious that the Senate President had nothing to do with the importation of any vehicle.

He said, 'A supplier was engaged by the Senate to supply a vehicle. While transferring the vehicle between Lagos and Abuja, it was impounded by the Customs. We believe that is an issue between the supplier and the Customs because the Senate has not taken delivery. So, why is somebody trying to drag in the name of Saraki into the issue.

'The documents on the vehicle are there for the general public to view and make their conclusions. Now that the matter has been referred to the Committee on Ethics, Privileges and Public Petitions, all the facts will be out.'

Melaye, who is a member of the committee, in his reaction after the plenary, told journalists that he was ready to be probed. He also said he would suspend his membership of the panel pending the determination of the case.

He said, 'I and here to respond to the issue raised by the Boko Haram suspect (and) senator of the Federal Republic of Nigeria, Senator Ali Ndume. I want to say, to me, it is a welcome development. Democracy is about investigation and no senator is above investigation. To me, it is a welcome development and it will finally clear the air on all the malicious and vindictive allegations.

When asked what would happen to his membership of the panel asked to probe him, Melaye replied, 'Definitely, in the interest of justice, I will excuse myself from the consideration of this matter except when invited for questioning.'

He added, 'I have my admission letters, results, certificate of discharge from ABU. Not only that, I was the Student Union Government President of ABU. On three occasions, I was the most popular student on campus. – Punch.