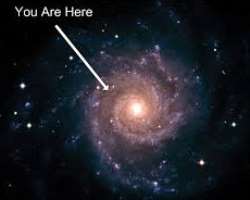 Somebody once asked me who God was. Not that this person didn’t know who God was from his religious and biblical studies: he wanted me to explain to him in simple layman’s terms how great God is.

We all know that God is the all-seeing, benevolent Supreme Being. But what is he really like? Can he be seen and what would he look like? Can he be described? And if the answer to this is ‘yes’ how?

So here it is in simple graphic detail:
You are a person; one simple person. The current population of Nigeria is estimated to be about 160 million. That is to say you’re one of a hundred and sixty million inhabitants of Nigeria. Nigeria is one of the 54 countries that make up the African continent with about 1.2 billion inhabitants. So this translates to you being one of the 1.2 billion people that live in Africa. Now the Planet Earth has five continents (that are further sub-divided into countries) – Africa, Antarctica, Asia, Europe, North America and South America – and the current estimated population of the world is estimated to be 7.5 billion souls. Again you are one person out of seven and a half billion people that live on the Planet Earth and that’s not counting all the other billions of life forms such as animals, insects, birds, plants and microbes. The Planet Earth is part of a solar system that has 8 (- or 9) other planets and a sun in the middle. To give you an impression of how tiny our planet is; Saturn is 764 times bigger, Jupiter is 1000 bigger and our sun is 1,287,000 times bigger than earth Our Solar System with all the planets and thesun ( - and you and me and everything else) is just one of more than a 100 billion systems in our galaxy which is roughly 100,000 light years across. Now scientists and astronomers currently agree that there are over 200 billion galaxies in our known universe with each galaxy supporting hundreds of billions of solar systems all complete with their own planets orbiting their own suns.

Now the guy who controls and oversees thisentire, incredible awesome structure of people, countries, planets, solar systems, galaxies and all the inhabitants within, whether they be human or who-knows-what, is called God. Think about that next time you use his name in vain or disobey his commandments!