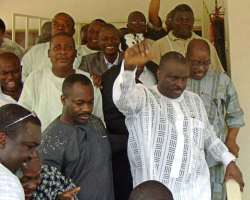 Former governor of Delta state, James Ibori, has challenged his 2012 conviction for fraud at the British court of appeal.

His media assistant, Tony Eluemunor, in a statement said his principal’s lawyer made this known at the Southwark London court on Friday, March 17, during the ongoing asset seizure trial.

The confiscation trial which is presided over by David Tomlinson, is to determine if Ibori’s assets should be seized.

In light of the information, the court indefinitely adjourned the ongoing proceedings on the confiscation case, Eluemunor said.

Bhadresh Gohil, Ibori’s former lawyer and co-accused, had alerted the authorities of police corruption at the heart of his and Ibori’s investigation and prosecution.

He also claimed that he was unlawfully detained for 33 days between November 20 and December 22, 2015.

Gohil, in July 2016, received £20,000 from the crown prosecution service as compensation for deprivation of his rights.

He was jailed for 10 years in 2010 for helping Ibori launder money.

Ibori was jailed for 13 years in 2012 after he pleaded guilty to laundering money in the United Kingdom.

He returned to Nigeria on February 4, six years after he was arrested in Dubai by Interpol operatives.