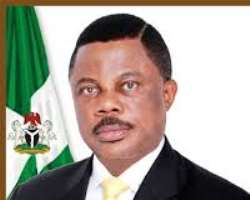 The All Progressives Grand Alliance (APGA) has appointed five new national officers to replace those expelled in Dec. 2016.

The party made this known in a communiqué issued at the end of its National Working Committee (NWC) meeting, in Awka on Friday.

Mr Ifeatu Obi-Okoye, National Publicity Secretary of APGA who read the communiqué, said that the five new officers were appointed in acting capacity pending their ratification by the National Executive Committee.

“Since nature abhors vacuum, the former members of the NWC that were expelled by the NEC meeting of Dec. 21, 2016 should be replaced.

“To this effect, five NWC members are appointed in acting capacity pending their ratification by the NEC.

Obi-Okoye said that the appointment was with immediate effect, while two remaining vacant national offices would be filled at a later date.

The APGA NWC also passed a vote of confidence on Gov. Willie Obiano of Anambra, saying he had recorded landmark achievements in several areas.

The NWC said that the achievements of Obiano include prompt and regular payment of workers’ salaries and pension.

According to the committee, the governor has also made the state one of the most secured in the country and the agricultural hub of West Africa.

They also commended Obiano for his efforts in road construction, rural electrification and for giving N20 million to each community in the state to execute projects of their choice.

“The NWC reaffirms and reiterates its unequivocal commitment to the re-election of Obiano, who has won several outstanding awards, for a second term in office in the Nov. 18 election in the state,” he said.

Meanwhile, the NWC also set up three committees as part of the party’s preparation for the Nov. 18 gubernatorial election in Anambra.