Our grouse with Kannywood – DG, Kano censorship board 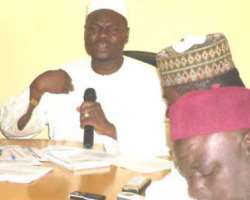 Until three years ago, Kano used to be the home of a thriving film industry in the Hausa language. Hausa language 'video-films' are similar to the larger 'Nollywood' film industry but are stylistically different from their southern counterparts, with most films including song and dance sequences influenced by Indian films and hip-hop music videos.

A sex scandal in 2007 involving a leaked cell phone video of a Hausa film actress, Maryam 'Hiyana' Usman, having sex with her boyfriend Usman Bobo, instigated a change in the leadership of the Kano State Censorship Board. The board had been instituted in 2001 after the implementation of Islamic Sharia law as a compromise measure between the film makers and the government.

The censorship board enabled the films to continue being made but with some restrictions on dress and interaction between male and female actors.

Following the sex scandal, the incumbent director general of the Kano State Censorship Board, Abubakar Rabo Abdulkareem, formerly commandant of the hisbah, was appointed in August, 2007, to arrest the ugly trend. Since this administrative change, controversy has continued to trail the industry as there have been alleged multiple arrests and acts of intimidation against the film industry and related entertainment businesses in Kano.

Amid this controversy, Malam Abdulkareem reiterated his commitment to sanitising the industry, insisting that the industry is dominated by producers who lack what it takes to make good films.

Making a presentation at the just concluded ZUMA film festival held in Abuja, he said, “I want to put the record straight with regard to the operations of the Kano State censorship board in particular. Before now, you are all aware that part of the problems facing creative industry is the issue of plagiarism and piracy amongst other flaws.

Particularly, in 2008, when I was appointed as the executive secretary of the board, these aforementioned irregularities was the trend among film practitioners in Kano.

“That was why we, as a statutory agency, established by the state edict and accommodated in the constitution of the country, insist that our art works, particularly our films, must be original. I can tell you that when we came on board, we met over 280 film production outfits without a corporate existence.

“The ordinary registration with a business name was not visible, not to talk of local registration which is expected a production outfit to comply with, for security reasons was neglected. There and then, the agency not satisfied with the production activities insisted that things must be done in the right way. Then, we were of the view that the practitioners desire to be trained again. That was why we introduced open-training, seminars in conjunction with the Nigerian Film Corporation .

How do you imagine the screen play, produced and directed by same person will be? There's no amount of research or investigative undertaking attached to the production. We say, if you like, you can produce the most representative pageant of the Hausa-Fulani society but you must be very mindful of the socio-cultural values of the society which you are depicting in your film.

Sub-standard equipment
“By making these observations, the practitioners who are the film makers tend to see the Kano censorship board as applying very strict measures. We are strict because we want things to be done the right way. I must appreciate the fact that the practitioners have the potentiality to make good films but five percent of their immediate concern is to copy other people's works at a cheap rate.

More so, most of the film producers in Kano make their films at a budget below N100,000,00 in addition to using sub-standard or obsolete equipment.”

“The equipment used in Kannywood are in a sorry state. Such equipment are not meant for professional and public production. That was why we insisted that things must be standardized. And of course, the so called remake of the Indian film stories and others foreign films are punctuated with themes of love and extreme hatred.

This is what obtains in Kannywood- love stories. We are now saying, let's appreciate our social problems using our films, for instance the rebranding project of the federation. In Kano, the society re-orientation project by the state government was launched five years before the re-branding project came on board, just to identify with our social problems and address the same via media.

“Yet, Kannywood practitioners lack the basic standard of practice, particularly when it comes to technique and professionalism. Also, absence of trade guilds, which is supposed to serve as identity for practitioners, is a major hindrance in Kannywood as well as in Nollywood. We want a situation whereby the practitioners will be regulated by their trade guilds, a situation whereby the screen play writers will have an acceptable standard.

“It's only when these trade guilds begin to live up to their expectations that we can be reassured that the practitioners can sustain the standard. Following what is on ground in Kannywood, no investor would want to risk his money by coming to invest in the industry, where the cameras are sub-standard, the screenplays adulterated and where everything seemed to be at mess.

I'm calling on Kannywood practitioners to sit up, learn to appreciate their limitations and at the same time build on it. That's why most often, you hear that Kano censorship board are very determined and committed not to compromise the standard legal requirements of the practice. What we are doing in Kano is to instil discipline, standardise the practice and insist on professional excellence.”