Apostle Suleiman Is A Target of Northern hawks- HURIWA: 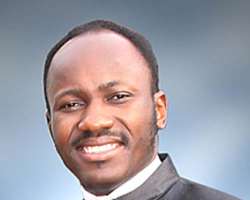 A pro-democracy and Non-governmental Organization- Human Rights Writers Association of Nigeria (HURIWA) has waded into the alleged sex scandal involving a self-acclaimed Canada based songstress miss. Stephanie Otobo and a Prominent Pentecostal leader Apostle SULEIMAN JOHNSON with a call for ethical and professional compliance by the lawyers.

Besides, the Rights group has decried the conduct of the law firm handling the brief for the accuser Miss. Otobo (Festus Keyamo) for unduly preferring to conduct the ‘TRIAL’ publicly in the court of public opinion through a cocktail of measures surreptitiously meant to assassinate the character of the alleged sexual liasone’s partner –Apostle SULEIMAN rather than allow the court of competent jurisdiction to handle the entire matter.

Conversely, HURIWA in the statement jointly endorsed by the National Coordinator Comrade Emmanuel Onwubiko and National Media Affairs Director Miss Zainab Yusuf disclosed that it was worried whether the law firm of Festus Keyamo may have violated section 25 of the Legal Practitioners Act, Chapter 207, laws of the Federation of Nigeria, which prohibits Lawyers from instigating litigation for their aggrandizement.

Specifically, section 25(a) and (b)(ii) of the Legal Practitioners Act, Chapter 207, laws of the Federation of Nigeria States as follows: “(a) It is unprofessional conduct for a lawyer to proffer advice to bring a lawsuit, except in rare cases where ties of blood, relationship or trust may render it necessary, fomenting strife or instigating litigation is unprofessional conduct; or (b) (ii) seeking out claimants in respect of personal injuries and other causes of action as possible clients;”

The rights group which stated that there are sufficient ground to suspect that the head of the omega fire ministry is being targeted by some northern hawks over his courageous act of speaking out against systematic genocide of the Christians in Southern Kaduna by Armed Fulani Herdsmen, has also called for caution on the part of all the parties to avoid stoking the embers of religious upheavals in these tensed and trying times.

“in as much as we suspect that Apostle SULEIMAN JOHNSON might just be a target from certain political hawks who are Northern irredentists because of his far-reaching calls for self Defence against the rampaging attacks by the murderous Armed Fulani Terrorists, we also believe that he is totally innocent of those charges of sexual escapades as made sensationally by Miss Otobo until they are sufficiently proven by a competent court of law”.

HURIWA cited copious provision of chapter four of the Nigerian constitution to condemn the outrageous media trial againstApostle SULEIMAN going by the essential Constitutional ingredient that recognizes all accused persons as innocent in the eye of the law until proven guilty.

Specifically, Section 36(5) of the constitution states thus: “(5) Every person who is charged with a criminal offence shall be presumed to be innocent until he is proved guilty; Provided that nothing in this section shall invalidate any law by reason only that the law imposes upon any such person the burden of proving particular facts.”

HURIWA charged the accuser and her lawyer to stop insulting the moral conscience of millions of Nigerians by indecently rolling out intimate details of the alleged sexual escapades which totally remains speculative; unsubstantiated and untested in the competent court of law.