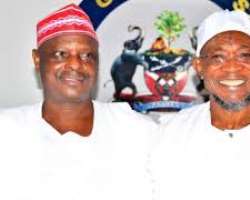 Former Governor of Kano state and Senator representing Kano Central district, Senator Rabiu Kwankwaso; and the Seriki Hausa Community in Ife on Tuesday said reports of evacuation of Hausa men from Ile Ife after last week's clash are targeted at further escalating a breach that has already been quenched.

Both Kwankwaso and the Governor of Osun Ogbeni Rauf Aregbesola cautioned the media against reports that could jeopardize the peace of the country.

He said commentators should be careful with reports on both the conventional and socia media so as not spark another trend of crisis in other parts of the country.

The senator stated this during a condolence visit he paid to Governor of Osun at the government house Osogbo.

Senator Kwankwaso who stressed that the kind of reports being disseminated by the media may aggravate the crisis commended the efforts of the Osun Governor in arresting the ugly incident.

"I want to appeal to our media men and women to be mindful of how they report the crisis so that it won't lead to a reprisal attack in other parts of the country.

"We should be mindful of what we write and use on our conventional media and the social media as well, we need some sense of responsibility from our media houses.

"We are not saying you should not do your job, but you should know that you also have a responsibility of maintaining peace in our society" he said

He pointed out that as soon as he got wind of the crisis he put a call through to Aregbesola and the peace moves taken by the governor has been corroborated by the Arewa community in Ife.

While urging members of the Hausa community in Ife and other parts of Osun to allow peace to reign, Senator Kwankwaso said they should be reminded that wherever they live is their home and everything possible must be done to embrace peace.

The senator who thanked the state government of Osun and the National Emergency Management Agency of Nigeria (NEMA) for trying to make life bearable for those affected through the provision of relief materials promised that his foundation will follow suit as soon as possible.

According to him, "As soon as I got to know about the crisis, I put a call through to my brother, Ogbeni Aregbesola who promised me on phone that he was already on top of the situation.

"I am happy that when I got here, members of the Arewa community corroborated what he told me on efforts at ensuring the safety of my people.

"I am using this opportunity to appeal to the Hausa community in Ife and around Osun to embrace peace and continue to live together in unity with their Yoruba hosts.

"Wherever you find yourself is your home and you should ensure it is peaceful.

"I thank the governor and NEMA for providing relief materials to those affected and I also promise to bring more through my foundation" the Senator said.

On the entourage of the Senator are members members of national Assembly and leaders of the Arewa community in Osun.

Meanwhile, Senator Rabiu Kwankwaso was accompanied by Governor Aregbesola to the scene of the crisis in Ile Ife for an on-the spot assessment of the situation.

Aregbesola also disclosed that more than twenty people who were said to have participated in the crisis have been arrested and will be made to face the law.

He said that what happened was just accidental as people of Osun are peace loving and accommodating.

He noted that Yoruba people may fight one another but they are always protective of and friendly with their visitors.

He buttressed his point with the Ife/Modakeke crisis which he said never touched the Hausa community.

According to him Yoruba and Hausa did not engage in any fight but the crisis was caused by miscreants from both sides of the divide.

"What caused the crisis was a minor disagreement. We are afraid that those who want to cause chaos in the country might be behind this crisis

"Yoruba may fight one another but they will not fight with their visitors. We are very peaceful and if you look around you will find out that enemies of peace are at work and they are few.

"And we don't know what their aim or interest was in causing this crisis. Perhaps they were sponsored because I have never heard that Yoruba and Hausa fought each other in Ife before but there might be misunderstanding and it would not be more than that.

"God has created and put us together in Nigeria. We must therefore live together in harmony. We should not allow agent of division to cause disaffection among us," Aregbesola said

Aregbesola also commended all security agencies for their swift response to distress call.

He averred that but for the quick response of security agencies the crisis would have snowballed into terrible level better imagined.