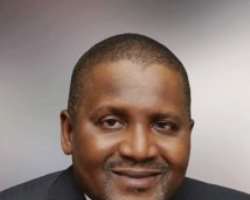 Aliko Dangote is now a coal miner as Tanzania has offered his Dangote Cement Company in the southeastern town of Mtwara, land to mine coal for its operations.

Tanzania's Ministry of Energy and Minerals at the weekend handed a 10-square-kilometre plot of land to the $500 million cement factory set up in 2015 by Aliko Dangote, Africa's richest man.

The factory has an annual capacity of 3 million tonnes.

According to local media, the coal concession was sanctioned by President John Magufuli to allow the company get a reliable supply of coal to fuel its activities.

Dangote Cement Factory in Tanzania..
Tanzania has banned the importation of coal from South Africa and Tancoal, the only one coal producing company in the country, cannot meet the entire market demand.

President Magufuli later intervened after a meeting with Nigerian billionaire and the company's owner Aliko Dangote over stalled negotiations on prices.

He blamed middlemen for the delay in supply plans and said Dangote 'will now buy natural gas directly from the state-run TPDC (Tanzania Petroleum Development Corporation)'.

It plans to roll out plants across Africa.