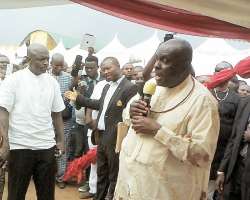 The political leader of leaders in Delta State and former Governor, His Excellency Chief James Onanefe Ibori on March 11, during the Delta Central Welcome rally in his honour declared that the incumbent Governor of the state, Dr Ifeanyi Arthur Okowa will return in 2019 to complete the eight (years) tenure of Delta North.

He said one good turn deserves another and that Delta North had in time past supported Delta Central and Delta South to serve eight years tenure, adding that the principles of equity, justice and good conscience demands that the Urbobos of Delta Central must support Okowa and Delta North to complete their eight (8) years so as to enable Urhobo enjoy Delta North support in 2023.

Chief Ibori who was swinging in bold smiles in appreciation of the honour accorded him by the good people of Delta central, further asserted that the quality results of consolidated politics will be visible for all Deltans to see in 2019, urging PDP members and supporters to rekindle their enthusiasm, hope and to ignore cheap blackmail and empty political propaganda embarked upon by some frustrated poliical mediocres currently parading themselves as the new messiah of the people.

The event was well attended as Chief Organiser and leader of PDP Delta Central, Senator Ighoyota Amori, Barrister Kingsley Esiso and his team worked tirelessly to ensure that Chief Ibori got the best of red carpet reception which took place at the permanent site of Western Delta University, Oghara in Delta State.

Various speakers commended Ibori and declared him once again ss the political leader of the Urhobo nation. They were unanimous that Ibori's persecution, incarceration and long absence caused the Urhobos a big loss in the political equation of the country and enjoined him to reflect on his odyssey and return the urhobo nation to her rightful political postion.

Speaker after speaker commended Ibori for his developmental strides, result oriented and proactive leadership qualities. They opined that Ibori's incarceration was connected to his fight for RESOURCE CONTROL in Nigeria.

In his response, James Ibori thanked all PDP faithfuls for standing by him and above all, for believing in him as their political leader since 1998 till date.

He commended the urhobo nation for their prayers for him and the avalanche of solidarity visits they extended to him since he came back from his travails in the United Kingdom which was a sacrifice he had to make as a leader.

Ibori was full of gratitude to the PDP family, the traditional rulers of Urhobo extraction and indeed the entire Urhobo nation, Deltans and Nigerians in general.

The event lived to its bidding and was attended by who is who in urhobo nation's politics.

MASSIVE DEFECTION FROM APC DELTA TO DELTA PDP: The political power play took a dramatic shape in Ughelli North and Aniocha North were over 1,000 APC members defected to PDP in the State.

State party Chairman and legal icon, Barrister Kingsley Esiso while receiving the defectors assured them that there is enough room for everybody describing the big PDP umbrella as a protective shade for all Deltans.

Responding on behalf of the defectors in Aniocha North, Mr Emmanuel Baxim Chinwe disclosed that APC DELTA is a visionless party capitalizing on empty and cheap political propaganda and blackmail hence they decided to move away from darkness to light (PDP).

Chinwe assured that the left over APC members in Aniocha North are warming up to dump the party before end of this month for PDP, so as to position themselves, effectively mobilize and support Gov Okowa for a landslide victory come 2019.

In Ughelli North, the spokesman of the decampees, Mr David Ughelliyovwe said they had to dump APC because the party is managed by inexperienced politicians coupled with petty squabbles, infighting and internal corruption which prompted the suspension of the State party secretary for exposing the party Chairman and his cabal over the mismanagement of pwrty funds.

He further asserted that PDP House of Assembly member, Hon Eric Oharisi has demonstrated reasonable competence and provided substantial empowerment for the people, such that portrays the PDP government under Gov Okowa as living up to its PROSPERITY FOR ALL DELTANS mantra.

Ughelliyovwe revealed that the entire Ughelli North will dump the moribund APC DELTA before the end of 2017, for PDP.