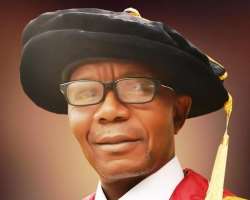 There's no need to verbose a simple narrative that University of Osun was experiencing a strong whirlwind before the emergence of Professor Labode Popoola as the Vice Chancellor of the institution.

When the erudite professor came on board, he was confronted by numerous operation deficiencies which had snowballed to a hard stub militating against all efforts to maximize Osun State University's capabilities.

Sitting on the chair of leadership well prepared, Professor Popoola has rejigged and repositioned the institution on a path to greatness within his 120 days in office.

In four months, Vice Chancellor Popoola has invested his experience in leadership and administration to reform UNIOSUN in a manner that will benefit the society and raise the reputation of Osun State University. His selfless and exemplary leadership style with integrity and firmly playing by the rules are some of the secrets that are gradually moving UNIOSUN towards the dream of its founding fathers.

Professor Popoola scorecard is very impressive and this must not be ignored in fairness to him. Through self-discipline, persuasion, negotiations and prudence, he has been able to block financial leakages, which had previously led to high operational costs. Within four months, N15 million that would have gone down the drain was saved for the University.

Professor Popoola is gradually changing the psyche of the students on the need to adhere to best academic practice on school fees payment and student registration. When he came on board four months ago, the University was being owed school fees to the tune of over two billion naira. This ugly development was already becoming an intractable problem as students believed it was a right not to pay school fees.

There were several cases of students owing fees of up to 11 semesters. Indeed, on 16th February, 2017, students protested against the payment of late registration penalty, a global practice which has been in existence since the inception of the school. Gladly, the crisis was resolved within few days. The messy development of students not wanting to pay tuition fees has gradually become a thing of the past. By dint of strong will and rare administrative tact, Professor Labode Popoola succeeded in making the students realize the need to pay their fees as and when due. Over 80% of the students have now registered as against less than 50% in February.

Also, Professor Popoola’s unique administrative style, responsible and responsive leadership are also noticeable. His administrative tact was demonstrated in the manner he managed to calm the frayed nerves of students during their protest against the shooting of two of their colleagues on Saturday, January 21, 2017. In a swift response to salvage the situation, he waded in to ensure that the two wounded students were given immediate and adequate medical attention. He mobilized the top echelon of the LAUTECH Teaching hospital to give the best care to save the lives of the victims and even defied security advice to visit the students on their hospital beds. Part of his tactical approach was to immediately suspend academic activities with a view to dousing the escalating tension resulting from the unfortunate incident. This worked like a magic as normalcy returned to campuses when the University reopened a week after the incident. Now, students have direct access to the VC via telephone, email among others.

The VC is also facilitating partnerships between UNIOSUN and other institutions for mutual relations and benefits. In his relentless drive to improve the overall teaching and research standards in the University, in line with international best practice, Professor Labode Popoola took advantage of his international influence to secure partnership with the University of Gambia and the Medical Research Council of The Gambia by signing MoU on staff and student exchange and capacity building, among others. The MoUs are expected to be concluded before the end of the first quarter of 2017.

In demonstration of his mastery of the managerial intricacy of a multi-campus system, which characterizes Osun State University, Professor Labode Popoola has recently secured Council approval of the Directorate of Intercampus and Public Relations, which will be responsible for coordination of activities across campuses. The Directorate is also designed to strengthen outreach and relationship across the spectrum of all stakeholders of the University. The Directorate will work with the Vice-Chancellor, Headships of Colleges, Staff, Students and other stakeholders to improve on service delivery.

Meanwhile, On Thursday, 2nd March, 2017 Osun State University outclassed other participating universities to emerge 1st position at the Inter-University Debate organized by the Olusegun Obasanjo Presidential Library (OOPL), in commemoration of former President Olusegun Obasanjo’s 80th Birthday and the Grand Opening of the OOPL. The theme of the debate was “Presidential Libraries will Reduce Leadership Deficit in Africa”. This feat was a product of the Vice-Chancellor’s persistence for an intensive coaching of the debating team. According to the VC, the winning team will now form the nucleus of UNIOSUN students intellectual and cultural outreach activities.

In his bid to boost its IT standard, Professor Labode Popoola has achieved for the University an unprecedented leap, with the recent acquisition of TELEPROMPTER, a standard modern IT device used for speech presentation. It is interesting to note that Osun State University is the first and the only university to acquire this device in Nigeria.

One of the identified shortcomings of UNIOSUN is its non-residential nature. Since his assumption of duties, Professor Popoola has embarked on an aggressive drive to make the University residential by building hostels on all campuses through private-public partnership initiative. This is beginning to yield desired results as the responses from the private sector have been very positive. Also, the process of rehabilitation of the abandoned hostel facility in Okuku has begun.

The administration has embarked on complete renovation of the administrative building on the main campus of the University to give the campus a face-lift ahead of the 6th Convocation and 10th Foundation Day ceremonies scheduled to hold from 23rd to 31st March, 2017.This is expected to be concluded by the 25th of March, 2017.

The desire of Professor Popoola to provide a smoth access raod to UNIOSUN main campus is yielding good result as funds have been raised through the Advancement Board to hasten the completion of the road after the University took it over from the government.

Also, In fulfilment of his commitment to improve the welfare of staff and students in the University, his administration has commenced weekend healthcare services at Ifetedo, Osogbo, Ikire and Okuku campuses of the University. The two other campuses will commence such services by the middle of March, latest.

Without mincing words, Professor Popoola has been able to bring sanity to the system to a large extent and towing the path of academic culture in all his doings since he assumed duties as the Vice Chancellor of Osun State University. From time to time, he reminds stakeholders of his vision to take Osun State University to a height where it will be “first among equals, most preferred, making significant contributions to society, an efficiently run, self-reliant, sustainable institution and a force to reckon with among universities globally; a truly 21st Century University before the end of his tenure.” Therefore, it won’t be out of place to congratulate Professor Popoola. Kudos Sir. Your best is yet to come.

*OYEBAMIJI ADEBOWALE ALABI is the Coordinator of the Progressive E-Group