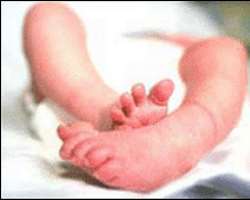 The babies were born more than three months early

A 31-year-old woman has given birth to sextuplets at the John Radcliffe Hospital in Oxfordshire.

Mrs Lamb, 31, from Oxford, is said to be recovering well. All of the babies are in the hospital's specialist Neonatal Intensive Care Unit.

Doctors said the next few days would be “critical” for the babies.

The hospital said live births of such a high number of babies was rare with sextuplets born once in every 4.5 million pregnancies.

Specialist nursing
According to the Multiple Births Foundation charity, the last surviving set of sextuplets in England, Scotland or Wales were born in 1993.

The John Radcliffe Hospital said: “Staff… feel privileged to play their part in such an unusual birth.

“A large team of doctors and nurses were present at the delivery or involved with the immediate management of the babies.

“There were several weeks of planning the delivery prior to the birth.”

“They are receiving round the clock intensive care and specialist nursing at the moment and their condition is constantly monitored.”