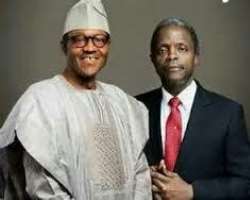 President Muhammadu Buhari has described his deputy, Prof. Yemi Osinbajo, as a running mate, who later turned out as a friend.

Buhari, who is currently on an extended medical vacation in London, United Kingdom, congratulated Osinbajo on his Twitter handle.

He described him as a running mate-turned-friend.
'Sixty hearty cheers for @ProfOsinbajo, running mate turned partner in service to Nigeria; and friend. Happy Birthday, Professor!' the President wrote.

She wrote, 'On the occasion of the birthday of Your Excellency, Prof. Yemi Osinbajo SAN, Ag. President of the Federal Republic of Nigeria, I wish to extend my congratulations to you and to state that the years you have spent building your reputation in multiple capacities have today resulted in your ability to carry out your duties in line with the manifesto of the All Progressives Congress to ensure that a better Nigeria is realised.

'Congratulations and Happy Birthday Prof.'
The Acting President on Wednesday said he was happy and fulfilled on his 60th birthday.

Osinbajo spoke in a brief interview with State House correspondents shortly after he cut his birthday cake with ministers at the end of the weekly meeting of the Federal Executive Council at the Presidential Villa, Abuja.