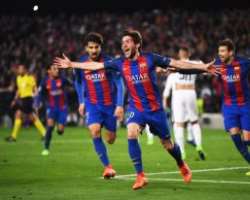 Barcelona completed one of the most sensational comebacks in soccer history by beating Paris St.-Germain, 6-1, to reach the Champions League quarterfinals on Wednesday, scoring the decisive goal of a 6-5 aggregate victory in the fifth minute of stoppage time.

Sergi Roberto's dramatic late goal sent the Nou Camp stadium wild and made Barcelona the first team ever to overturn a 4-0 first-leg defeat since the Champions League format started in the 1992-93 season.

Barcelona needed three more goals to advance, and the feat seemed impossible even after Neymar scored with a free kick in the 88th minute.

But Neymar scored on a penalty kick in the 90th, and then followed up with a chipped pass for the substitute Roberto, who steered the ball beyond goalkeeper Kevin Trapp in injury time.

The goal sent Barcelona's bench flooding onto the pitch as the stadium celebrated.